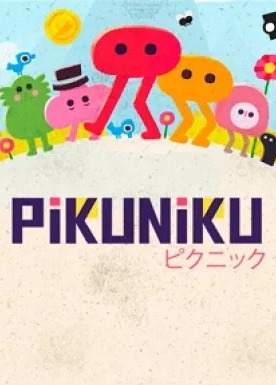 Pikuniku is a puzzle adventure video game developed by French-British indie collective Sectordub and published by Devolver Digital, that was released on January 24, 2019 for Linux, macOS, Nintendo Switch and Windows. The player controls the titular red creature, Piku, through a colourful world, to put an end to a plot to harvest the entirety of the land's resources.

It received generally positive reviews from critics, with its main criticism being the short length of the game.

Pikuniku is a puzzle and adventure game where the player must control the protagonist, Piku, through levels and solve puzzles to progress. The majority of puzzles involve kicking and pushing objects onto switches to open doors and access rooms, allowing you to proceed through the level. Piku can also lasso his legs to swing from hooks or curl into a ball and roll, allowing the player to move around faster and reach higher or previously inaccessible areas. Throughout the game, the player will encounter villages, where they can interact with villagers, and spend currency earned in the game's levels on items such as hats. The game also features a local cooperative mode with 9 levels, and the second player controlling Niku, an orange creature similar to Piku. Both of the players must cooperate to negotiate themselves to a boat at the end of the level.

The game begins with the protagonist, Piku, waking up from his slumber in a cave. After venturing to a nearby village, locals become terrified of Piku. They locked him up in a cage calling to him a 'ghastly beast of legend', settling on imprisoning him until he agrees to fix the town bridge, which he'd accidentally destroyed. After repairing the bridge and being set free from imprisonment, the town enlists him to help deal with the entrepreneurial Mr. Sunshine, a pink creature similar to Piku, who attempts to harvest the entirety of the world's natural resources for his own wealth.