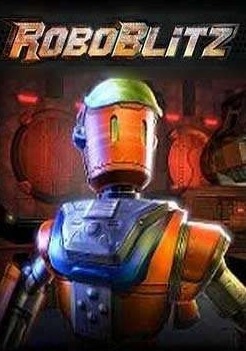 RoboBlitz is an indie puzzle action video game for Microsoft Windows through Steam and the Xbox 360 through Xbox Live Arcade. The game was developed by Naked Sky Entertainment and released on November 7, 2006. It was the first Unreal Engine 3 game alongside Gears of War to be released.

The player controls Blitz, a technician robot who must navigate through six three part sectors to power up an orbital space cannon and stop a new looming NEOD threat. Each sector has a multitude of enemies and a singular physics based puzzle per stage, as well as 'upgradium' pickups that can be used to expand Blitz' utilities, movement, and weaponry.

RoboBlitz uses a middleware tool developed by Allegorithmic to store its textures procedurally. This technique is used to make the game file size smaller, the actual game is less than 50 megabytes on Xbox Live.

RoboBlitz was met with critical acclaim and has received several awards and honors. The game was nominated for the 2007 Independent Games Festival for both the Seumas McNally Grand Prize and Excellence in Visual Art awards. The game was the Grand Prize winner for the 2007 Indie Games Showcase, a winner of the GameTap Indie Award, and "Best Digital Download Game of the Year" by Play Magazine.