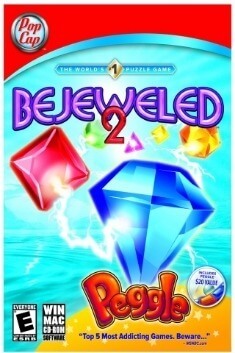 The objective of the game is to swap one gem with an adjacent one to form a chain of three or more gems of the same color. When such a chain is created, the gems disappear, causing randomly generated gems to fall from the top to take the matched gems' place. Sometimes, falling gems automatically line up, causing chain reactions. This is called a cascade. There are several different modes of gameplay available, including various secret gameplay modes that can be accessed by beating levels of Classic, Puzzle, Endless, and Action modes.

The player tries to match three to five of the same color gems together either horizontally or vertically. Every legitimate move awards points to the player, which is stated at the bottom of the screen in the score bar. A normal swap is three gems. Once swapped, three new gems come in. A match of four gems creates a power gem. Power gems explode gems so more score is added to the score bar. A match of five gems creates a hyper cube. When swapped, a hypercube destroys any of the gems of the same color gem it was swapped with. The game ends when no more moves can be made.

Action mode is similar to Classic, except that in Action mode, the score bar starts halfway full and slowly begins to retract, it starts draining faster after each level. As the player scores, the bar gets longer. The player's score is worth more on the bar since it is timed. If the bar completely runs out, the game is over.

Puzzle Mode is made up of several different scenarios. Each scenario can be solved by clearing the level of gems by using a certain combination of moves. There are also several unique gems, including Bombs and Rocks. The player progresses by completing the puzzles on the planet. After four puzzles on the scenario are completed, the player can move on to the next scenario, or complete the current scenario by completing the last puzzle on the planet. The player can undo a move if it was a mistake. The player can also use hints to help them. Hints will also tell the player that they need to undo a few matches up to a point where the puzzle can be solved. Puzzle does not appear on the iOS and Android version of the game.

Endless is an untimed and never ending version of Bejeweled 2. The player can make moves at whatever pace they wish, without the worry of running out of moves. The scores for various gem combinations stay constant, regardless of the level. This game is intended to be relaxing or for beginners.

At game level 281, endless offers up an additional new game called "Finity." Finity is not available on the iOS version of the game.

Bejeweled Blitz is released as an add-on for the iOS version of Bejeweled 2. It has features such as multipliers and extra special gems. Score results from this mode can be uploaded to Facebook. Coins earned during the game can be used to buy "Boosts" which gives the player certain power-ups while playing. It also used to be available for Google+, but has been removed from the site.

There are four modes at the start of the game, but secret modes can be discovered. If one secret mode is unlocked, a ? button will appear below the bottom on the warp ring on the main menu, clicking on it will show the secret modes. The secret modes do not appear on the WiiWare and mobile versions.

If the player reaches Level 18 in Classic Mode, Twilight Mode will be unlocked. The mode acts like Classic mode, but the pitch for all the sounds are lower, the speed is slowed down, and all the backdrops are darker and flipped over. The gravity of the gems alter every time a move is made.

This mode is unlocked after reaching Level 9 in Action mode. The mode plays the same, except that the game is sped up and the sounds are high pitched. If the player matches quickly they can get more score on their matches than they usually do.

The player must reach level 281 in Endless Mode. The game acts like Action Mode, but the time bar decreases slower than Action and Hyper. The Rock (Coal) and Bomb gems from Puzzle Mode appear. Points are only awarded from explosions (explosion from Power or Bomb gems, destruction from Hypercubes), and the backdrops have their hue changed. The progress bar will only add up if special gems are used.

Unlocked by completing all 80 Puzzles in Puzzle mode. Acts like Puzzle mode, with score. When a Puzzle is finished, the progress bar increases. When filled up completely, the player goes to the next level. The game ends when all 80 puzzles are finished. If the player uses a hint, they will not be awarded any points from matching gems in that Puzzle, and progress bar does not increase for that Puzzle, even if undo is used.

All games from the serie "Bejeweled"