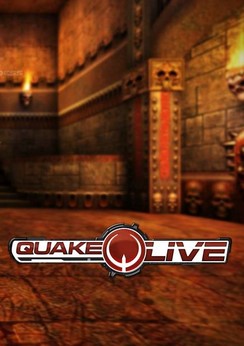 Quake Live is a first-person shooter video game by id Software. It is an updated version of Quake III Arena that was originally designed as a free-to-play game launched via a web browser plug-in. On September 17, 2014, the game was re-launched as a standalone title on Steam.

The gameplay of Quake Live consists of players attempting to kill more of their opponents than any other player or team in a given match. This is achieved by navigating a 3D environment and shooting other players with a variety of weapons, while collecting health, armor, weapons, ammo and various power-ups. As players get more advanced, they use other tricks and techniques such as rocket and strafe jumping.

Quake Live was released as a free version of Quake III: Gold (Quake III and its expansion pack, Team Arena) available only through a web browser. Quake Live Skill-based matchmaking is powered by a "metagame engine" developed by GaimTheory. Development of the match-making system was taken on by id Software after GaimTheory's collapse.

On August 3, 2007, at QuakeCon 2007, id Software publicly announced their plans to release a free browser-based Quake III game titled Quake Zero. In early 2008, the title was officially renamed to Quake Live due to a domain squatting issue.

During late 2008 and early 2009, Quake Live was in an invitation-only closed beta. A handful of players were selected to begin the testing of the beta and were later allowed to invite a limited number of friends, whom, in turn, were permitted to send out invitations of their own. On February 24, 2009, the game progressed from closed beta to open beta, which caused an increased amount of traffic on the web server. Queues were organized to limit the stress and prevent the overloading of the servers. Within the first six hours after launch over 113,000 user accounts were created. The queues were removed after several days, and the servers were then upgraded to handle the larger volume of traffic.

Once Quake Live exited its closed beta stage, it was to be funded partially by in-game and website-based advertisements. IGA Worldwide were contracted by id Software to handle this aspect of the game's marketing. Problems with this model surfaced almost immediately with the announcement by the advertising agency that they were struggling as a result of the financial difficulties. In March 2009, the agency admitted that sale was a possibility if further investments were not forthcoming.