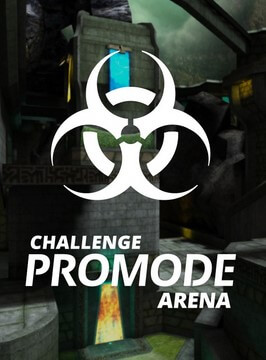 Challenge ProMode Arena has become the standard competitive mod for Q3A since the Cyberathlete Professional League announced CPMA as its competition mod of choice. The mod has its own division in Cyberathlete Amateur League, is used in Electronic Sports World Cup, and has its own competitions and leagues.

The Challenge ProMode project was created by Richard "Hoony" Sandlant in May 1999, following the release of Q3Test, the beta version of Quake III Arena. Its goals were to make a more exciting and challenging game in the hope that this would help advance Q3A as a professional sport. John Carmack, lead programmer of Q3A, suggested a more challenging version of the game might be better for professional gamers:

Before the design team began their work the CPM team asked the community to brainstorm a list of possible changes. The designers used these suggestions in a process of tweaking and testing to develop the Challenge ProMode gameplay. Two public beta versions were then released for feedback and input from the community.

On August 28, 2000 the final version, 1.0, was released which was followed in December 2000 by the project changing its name to Challenge ProMode Arena to reflected the added multi-arena capability as Kevin "arQon" Blenkinsopp became the lead programmer. The last official CPMA version, 1.50, was released in January 7, 2018.

HoonyMode is a form of tournament introduced in November 2003 which is loosely based on the rules of tennis. During the warm-up, each player chooses a spawn-point or they are randomly generated if none are chosen. One player typically has a "stronger" spawn and the other a "weaker" one. When the game begins the player with the stronger spawn is considered to have the "serve" and each player death is treated as a point. After each point is scored players and the arena are reset and a new point is played; players switch spawn-points, so the player who had the "weak" spawn for the previous point now has the "strong" one, effecting a change of serve. All in-game behaviour (i.e. weapons, physics, etc.) remains the same as in the standard deathmatch.

Referencing the video game Team Fortress, Not Team Fortress is a class-based form of Capture the Flag introduced in April 2004. Players spawn with no armour and weapons determined by their class with health and armour regenerating during play. By default, there are four classes—Fighter, Scout, Sniper and Tank which can all be customised by the server administrator.