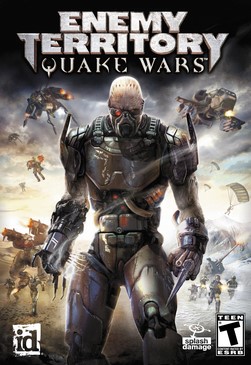 Enemy Territory: Quake Wars is a first-person shooter video game developed by Splash Damage and published by Activision for Microsoft Windows, Linux, Mac OS X, PlayStation 3 and Xbox 360. The prequel to Quake II, Quake Wars is set in the same science fiction universe as Quake II and Quake 4, with a minimal back-story serving as a prequel to Quake II. It is the second multiplayer-focused game in the Quake series after Quake III Arena.

Quake Wars features similar gameplay to Wolfenstein: Enemy Territory, but with the addition of controllable vehicles and aircraft as well as multiple AI deployables, asymmetric teams, much bigger maps and the option of computer-controlled bot opponents. Unlike the previous Enemy Territory games, Quake Wars is a commercial release rather than a free download.

Since 2011, the rights to the game have reverted to ZeniMax Media.

Quake Wars is a class-based, objective focused, team-oriented game. Teams are based on human (GDF) and alien (Strogg) technology. While the teams are asymmetrical, both sides have the same basic weapons and tools to complete objectives. Unlike other team-based online games (such as the Battlefield series), the gameplay is much more focused on one or two main objectives at once, rather than spread all over the combat area. This allows for much more focused and intense combat situations, similar to the original Unreal Tournament assault mode.

Each player class normally has new objectives show up during game play, many times based around the specific capabilities of that class. The game also has the capability to group players into fireteams for greater coordinated strategy. These fireteams can be user created or game generated depending on the mission selected by the player.

The game has an experience points (XP) rewards system in place, which rewards every player some points depending on the mission completed. This accumulated XP later leads to unlocks which may vary from availability of new equipment/weapons to abilities like faster movement or more accurate weapons. These rewards are reset to zero after the completion of every campaign, which consists of three unique maps, all with a common locale/region.

Enemy Territory: Quake Wars was first announced through a press release on May 16, 2005. The public beta opened to FilePlanet paid subscribers on June 20, 2007 and to nonpaying members on June 23, 2007. There were also beta keys given out for a limited time exclusively at QuakeCon 2007. The public beta ended on September 25, 2007. A second build of the beta was released on August 3, 2007. It features a new map entitled Valley to replace Sewer and several changes to the game code to improve performance and implement new features. This map was featured in tutorial videos released prior to the beta, and was the map made available to play at QuakeCon 2006. The Valley map is based on a real Earth location: Yosemite Valley.

A PC demo for Windows was released on September 10, 2007 and for Linux on October 16, 2007 also featuring the map Valley. The full Linux version was released on October 19, 2007. A Mac OS X client has also been released. In January 2008, a new updated version (2.0) of the demo was released. The updated demo includes changes introduced in the 1.4 patch such as 'tutorial mode'. The original 1.0 demo is no longer supported and should not be downloaded. The final retail version was first released on September 28, 2007 for Windows. The initial Linux release, created by id Software employee Timothee Besset, was made available three weeks later on October 19, 2007. As of 2017, Quake Wars is the most recent id Software game to have received a Linux release.

Quake Wars utilized a modified version of the id Tech 4 engine with the addition of a technology called MegaTexture, a new texture mapping technique developed by John D. Carmack of id Software. The technology allows maps to be totally unique, without any repeated terrain tiles. Battlefields can be rendered to the horizon without any fogging, with over a square mile of terrain at inch-level detail, while also providing terrain-type detail that defines such factors as bullet hit effects, vehicle traction, sound effects, and so on. Each megatexture is derived from a 32768×32768 pixel image, which takes up around 3 gigabytes in its raw form (with 3 bytes per pixel, one byte for each color channel).