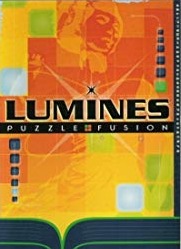 Lumines: Puzzle Fusion (ルミネス −音と光の電飾パズル− Ruminesu − Oto to Hikari no Denshoku Pazuru −) is a puzzle video game based on sound and light patterns. Created by game designer Tetsuya Mizuguchi and his company, Q Entertainment, it was first released as a launch title for the PlayStation Portable in Japan on December 12, 2004 and released in North America on March 23, 2005 and released in Europe on September 1, 2005. It later received a port to Microsoft Windows released first in December 2007.

Lumines: Puzzle Fusion is a block-dropping game similar to Tetris, where the player using 2x2 tetrominos containing random tiles of two different colors attempts to make completely filled rectangular shapes of the same color on the playing field, with larger shapes earning more points. The game's mechanics are tied heavily to the music played over the game, as blocks are only scored and cleared after a certain number of measures in the music have passed. As the player progresses through the game, the game transitions between different skins that affect the colors and music.

The game has received a ports, maintaining the core features but adding additional music and skins to the PlayStation 2, PlayStation 3, and Xbox 360 consoles as well as an iOS version. A remastered version of the original game was released on June 26, 2018 for Windows, PlayStation 4, Nintendo Switch, and Xbox One platforms.

The game is played in different skins. Skins affect the appearance of the board, the color scheme of the blocks, and contain a different music track and sound effects. Each skin also changes the rate at which the Time Line moves across the screen due to the Time Line moving in time with the music. Skins are unlocked by progressing through the different game modes. This can affect the gameplay; faster tempos make it more difficult to create large combos, and slower tempos may cause the playing field to fill while waiting for the Time Line to sweep across.

The objective is to rotate and align the blocks in such a way as to create colored squares. Increasing score multipliers are earned by repeatedly clearing squares on consecutive Time Line sweeps. Bonuses are also awarded by reducing all remaining tiles to one single color or for removing all non-active tiles from the screen altogether. Multiple colored squares of the same color can be shared between a single geometric shape. For example, if one should get a 2x3 area of matching blocks, the middle portion will "share" itself with both the left and right halves and create two colored squares. The player loses when the blocks pile up to the top of the grid.

There are four basic modes in the game: Challenge, Time Attack, Puzzle, Vs., and Vs. CPU Mode. Challenge Mode cycles through skins in a fixed order of generally increasing difficulty and is played until the blocks pile up to the top of the screen. The maximum score in Challenge Mode is 999,999 points. Time Attack games give the player a limited time to clear as many blocks as possible. Puzzle mode challenges the player to create pictures (With Exception with "Clear All", Instead and all colored squares needs be placed and then make them disappear from the board) by forming the picture with one color while surrounding it with the opposite color. Vs. CPU mode is a series of battles against A.I. opponents. A line splits the playing field in half, and deleting blocks or combinations of blocks shifts the line towards the opposing player, giving the opposing player less room on their side. The battle ends when blocks pile up all the way to the top of the screen for one player. Two players with PSPs can use their wireless connection to play in the same way.

Lumines received positive reviews, garnering an average score of 89% from over 55 reviews on Metacritic and a score of 89.93% from over 72 reviews on Gamerankings; it was the highest-rated PSP title on both sites until being pushed to 2nd place by 2008's God of War: Chains of Olympus. GameSpot scoring the game a 9 out of 10 called Lumines, "the greatest Tetris-style puzzle game since Tetris itself" praising its sound and beautiful presentation Jeremy Parish from 1UP.com rated the game a "A" stating, "Q Entertainment has used the Tetris template to duplicate a lightning-in-a-bottle feeling equal in brilliance and addictiveness to the puzzle classic."

As of October 11, 2005, Lumines: Puzzle Fusion has sold over half a million units since its original release in Japan. Europe has sold 180,000 units since its release in September 2005, and North America has sold around 300,000 since March while selling 70,000 units In Japan. In the summer of 2007, an exploit was discovered within Lumines, allowing owners of any variety of PSP including the current 3.50 firmware at the time to downgrade and install custom firmware. This resulted in a surge of popularity and nearly a 6000% increase in sales on Amazon alone.