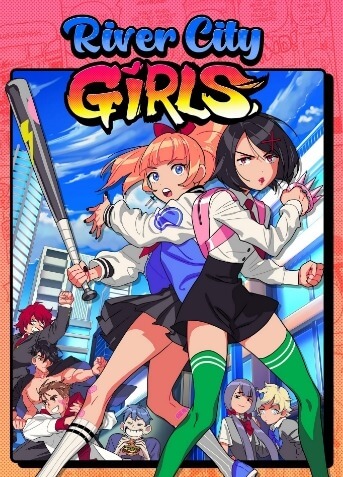 River City Girls is a 2019 beat 'em up video game developed by WayForward and Arc System Works, and published by Arc System Works. A spin-off title in the Kunio-kun franchise, the game stars Misako and Kyoko (originally appearing in Nintendo World Cup and Kunio-tachi no Banka respectively) who fights their way through enemies and obstacles to rescue their boyfriends, series protagonists Kunio and Riki, who have been kidnapped. The game was released for the Nintendo Switch, PlayStation 4, Xbox One, and Microsoft Windows (PC) in September 2019.

River City Girls is a beat 'em up brawler. The player can choose between Kyoko or Misako, who play similarly but each has unique moves and animations, or two players can play a (local) cooperative mode with both. Waves of enemies and occasional bosses are out to oppose the chosen character(s). The player progresses through six areas in a linear manner similar to Shodai Nekketsu Kōha Kunio-kun and Shin Nekketsu Kōha: Kunio-tachi no Banka. Like River City Ransom, the player is free to return to previous areas, but they must complete certain battles and objectives to go to the new locations in their current area. In many areas where combat is initiated the first time, chains and a lock will surround the edges of the screen (referred in-game as a screenlock). At this point, the player will be unable to leave the area until all enemies are defeated. There are six bosses in the game; to be able to advance to the next area, the player must defeat the boss of the current area.

Defeated enemies drop money for the player to collect, just as in River City Ransom. Money can be spent at various shops to purchase items, food, and gear to increase stats. Money can also be used to purchase new fighting moves from the Dojo to complement the starting basic set. Abilities are all simple to perform, being a direction + a button; complexity for advanced players lies in chaining the simple moves together into long combos. Characters also gain experience points and level-ups from defeating enemies, as in River City Ransom: Underground. Completion of quests grant experience and money rewards to both characters, ensuring that the one that the player is not using in a single player game does not fall behind in levels or money.

As bosses are defeated in the game, enemies become stronger. Upon defeating the final enemy in an area, they might surrender. The player can choose to either defeat the enemy as normal, or to recruit them. Recruited enemies can be summoned to assist the player, although only one recruit is kept at a time. The player can pick up various objects during the game and use them as improvised weapons, but they will break after being used multiple times.

If the player loses all their stamina bar and is defeated (or both characters defeated in multiplayer), the player must restart the current room and lose a portion of their cash on hand, but their health is fully restored. In multiplayer, if only one character is knocked out, it is possible for the other player to revive them by standing over their fallen body and repeatedly kicking their departing soul back into it. An angel leaving the character's body acts as a timer so that the other player can perform the revival as fast as possible.

Once introduced, Kunio-kun character Godai will offer players numerous side quests. There are also various NPCs that the player can interact with.

Misako is in detention at River City High, accompanied by her best friend Kyoko. She receives an alarming message on her phone: a picture of Kunio and Riki, the heroes of River City High and their boyfriends, seemingly being kidnapped. Kyoko and Misako decide to spring into action to rescue their boyfriends. The pair rampages across the city, attacking any suspicious person they find while attempting to find answers.

River City Girls was released in September 2019, generally over digital distribution channels such as the Nintendo eShop, PlayStation Network (PSN), Xbox Games Store, Steam, and GOG.com. Limited Run Games released a physical edition of the game as well as a Collector's Edition that included several add-ons.

River City Girls received "generally favorable" reviews from critics and a score of 78 according to review aggregator Metacritic, based on 15 reviews for the PlayStation 4 version and 11 reviews for the Nintendo Switch version. Reviewers generally praised the game's art style, graphics, and sense of humor. The soundtrack was called out for special praise, with one reviewer writing that "there isn't a single bad song on it", and another writing "This is a soundtrack I'll be listening to for quite some time." The game's inventive bosses were considered a strength, and the two-player co-operative mode was praised as well. Some of the more ambivalent reviewers felt that the beat 'em up action was ultimately a tad repetitive; others pointed out that the RPG elements such as equipping accessories were often so minor as to be ignorable, and that the rate of earning cash from defeating enemies was possibly too low. The ending to the game was also called out as "unsatisfying".