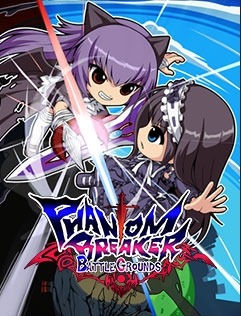 Phantom Breaker: Battle Grounds (ファントムブレイカー：バトルグラウンド Fantomu Bureikā: Batoru Guraundo) is a beat 'em up developed and published by 5pb. and originally released on February 27, 2013. it is a spin-off of the fighting game Phantom Breaker.

On March 12, 2013, a downloadable content add-on, the "Kurisu Pack," was released which adds Kurisu Makise as a playable character and raises the maximum character level. The game was featured in the official music video of "Move" by I Fight Dragons.

Phantom Breaker: Battle Grounds pays homage to the graphical style and musical nature of Scott Pilgrim vs. the World: The Game, while its gameplay takes inspiration from Guardian Heroes with the ability to change foreground and background planes.

In Phantom Breaker: Battle Grounds players play as chibi versions of Mikoto, Waka, Itsuki and Yuzuha as they fight against large groups of enemies. Their friend, Nagi, has been captured by Phantom and the girls must go through hordes of Phantom's minions to try and rescue her, with each one having unique encounters and dialogue with the enemies.

A PlayStation Vita version was released on March 13, 2014 in Japan. The game was released in Europe on July 30, 2014 and North America on August 12, 2014. It is the first Vita game released worldwide by 5pb., and, according to producer Masaki Sakari, involved a number of hurdles relating to regional certification. A PC port was later announced, which would be published by Degica and was released on January 23, 2015. A PlayStation 4 version of the game, entitled Phantom Breaker: Battle Grounds Overdrive had also been announced and was released on July 12, 2015. a Nintendo Switch port of the Overdrive edition was released on December 7, 2017, adding in additional content not found in previous versions, but lacking the online functionality of the original.