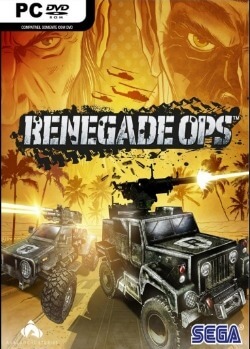 Renegade Ops is a top-down vehicular combat video game with role-playing elements developed by Avalanche Studios and published by Sega for Microsoft Windows, PlayStation 3 and Xbox 360. Renegade Ops was announced on 30 March 2011, and released on 13 September 2011 for PlayStation 3 and 14 September 2011 for Xbox 360. The Microsoft Windows version of the game was released on 26 October 2011.

The Steam version of the game includes Gordon Freeman and the buggy he uses in Valve Corporation's Half-Life 2, as additional bonus characters and vehicle, and the Antlion, from the same game, as additional special weapon.

Miranda Raison provides the voice of Natasha in the game.

The game currently holds an 81 and 80 for Xbox 360 and PlayStation 3 on Metacritic, respectively, indicating generally positive reviews.