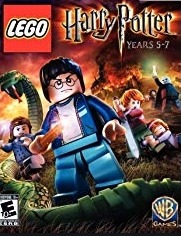 The game received generally positive reviews, especially to the humour added to the game's narrative.

Lego Harry Potter: Years 5–7 basis gameplay follows the standards of that of the previous game as adapted to the story of the last three books and four films, covering a wide range of new characters, locations and items. The online play feature that appeared in Lego Harry Potter Years 1–4 is absent from the PS3 and Xbox 360 versions of this game.

Directly after Years 1–4 was announced, it was speculated that a Years 5-7 would be released in the near future. It was actually revealed to be planned for a Holiday 2011 release on 19 May 2011 by an announcement by Warner Bros. and TT Games. In the instruction booklet for various Lego Harry Potter 2011 sets, a page shows an ad for the game with Harry and Voldemort having a climactic duel (Harry casting Expelliarmus and Voldemort shouting Avada Kedavra, a scene from the final book/movie). During an exclusive gameplay session with TT Games, it was announced that there would be an iOS version to be released on the iTunes App Store later this year. The cover art for the game was released on 1 September 2011. A few days after, they released a trailer featuring Voldemort and Bellatrix. Those two, and a third, are available on the official site.

Justin Davis of IGN gave Lego Harry Potter: Years 5–7 an 8 out of 10. He praised the humorous cutscenes, the use of the film's music tracks, the amount of gameplay available after the main adventure is cleared, and that the "game is simple enough for anyone to pick up and play." Neil Davey from United Kingdom magazine The Guardian scored the game at 4 stars from 5, saying "there's weeks of fun in this package."