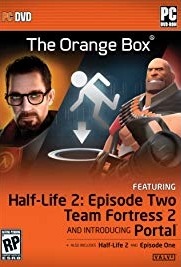 The Orange Box is a video game compilation containing five games developed by Valve Corporation. Two of the games included, Half-Life 2 and its first stand-alone expansion, Episode One, had previously been released as separate products. Three new games were also included in the compilation: the second stand-alone expansion, Half-Life 2: Episode Two, the puzzle game Portal, and Team Fortress 2, the multiplayer game sequel to Team Fortress Classic. Valve also released a soundtrack containing music from the games within the compilation. A separate product entitled The Black Box was planned, which would have included only the new games, but was later cancelled.

The Orange Box was first released for Microsoft Windows and Xbox 360 on October 10, 2007, while the PlayStation 3 version, developed by EA UK was released in December 11, 2007. A digital Orange Box pack, containing the five games, was released on May 27, 2010 for OS X following the release of Steam for the platform, while a similar version for Linux followed after the Steam's clients release for Linux in early 2013.

The Orange Box received critical acclaim, with Portal being recognized as a surprise favorite of the package. The PlayStation 3 version of The Orange Box was noted for several technical shortcomings that were not present in the other versions, only a few of which were fixed through a single patch.

The Orange Box features five complete games compiled into one retail unit: Half-Life 2 and its two continuations, Episode One and Episode Two; Portal; and Team Fortress 2. All of these games use Valve's Source engine.

Through the Steam platform for the Windows version, the games can collect and report in-depth data such as where the player's character died, completion time, and total victories in multiplayer modes. This data is compiled to generate gameplay statistics for Episode One, Episode Two, and Team Fortress 2.

Although Half-Life 2 has the largest proportion of Achievements, there are 99 spread across all five games, exceeding the 50-Achievement limit that Microsoft maintains to feature the most Achievements of any Xbox 360 product. These Achievements include killing a certain number of monsters, finding hidden weapon caches, or other tasks specific to each game.

All the games except Half-Life 2 contain in-game commentary that can be enabled, allowing the player to listen to the developers discuss the creation and purpose of particular sections and components of each game. This has been a feature of every Valve game since Half-Life 2: Lost Coast due to the commentary's popularity in that game, according to Erik Wolpaw, lead writer for Portal.

Half-Life 2 is a science fiction first-person shooter game and the sequel to Half-Life. While remaining similar in style to the original, Half-Life 2 introduces new concepts to the series such as physics-based puzzles and vehicle sections. The game takes place in the fictional City 17 and surrounding areas as the player takes on the role of scientist Gordon Freeman. Freeman is thrust into a dystopian environment in which the aftermath of the events of Half-Life have come to bear fully upon human society, and he is forced to fight against increasingly unfavorable odds in order to survive. In his struggle, he is joined by various acquaintances, including former Black Mesa colleagues, oppressed citizens of City 17, and the Vortigaunts, all of whom later prove to be valuable allies. Half-Life 2 received critical acclaim, including 35 Game of the Year awards, when it was originally released for Windows in 2004. As of December 3, 2008, over 6.5 million copies of Half-Life 2 have been sold at retail. Although Steam sales figures are unknown, their rate surpassed retail's in mid-2008 and they are significantly more profitable per-unit.

Half-Life 2: Episode One continues from the events of Half-Life 2. Episode One builds on the original, adding cooperative play with friendly non-player characters such as Alyx Vance, whose new abilities complement Freeman's abilities and allow her to comprehend and respond to the player's actions by lending help. It is set immediately after the end of Half-Life 2 in the war-torn City 17 and nearby areas. Episode One follows scientist Gordon Freeman and his companion Alyx Vance as they continue to cope with the events chronicled in Half-Life 2 and humanity's continuing struggle against the Combine. The game was originally released in 2006 for Windows as a standalone game and was generally well received.

Half-Life 2: Episode Two was first available as part of The Orange Box and focuses on expansive environments, travel, and less linear play. In the game, Gordon Freeman and the series' other major characters move away from City 17 to the surrounding wilderness following the closing events of Episode One. The game was praised for its new environments and features and was well received by critics.

Portal is a single-player first-person action/puzzle game that was first available as part of The Orange Box. The game consists primarily of a series of puzzles, solved by creating portals which the player and simple objects can pass through in order to reach an exit point, while being ordered by an AI-programmed robot named GLaDOS. The portal system and the unusual physics it creates are the emphasis of the game. Portal was a surprise favorite of The Orange Box, receiving widespread praise and several Game of the Year awards.

Team Fortress 2 is a multiplayer team-based first-person shooter that was first available as part of The Orange Box. The game is a sequel to the original Quake modification, Team Fortress, and Valve's Half-Life modification, Team Fortress Classic. Its focus is on two competing teams that attack each other in order to achieve varying objectives, including capturing control points or defending them from attack, or capturing a flag. Players can choose to play as one of nine classes in these teams, each with different strengths and weaknesses. Unlike most other Source-powered games, Team Fortress 2 features a cartoon art style and non-realistic graphics. Team Fortress 2 was very well received by critics; it was particularly praised for its unique artistic direction and graphics. It is the only multiplayer game to appear in the collection. The Xbox 360 version has not received any updates since July 21, 2009 and the PlayStation 3 version received no updates at all, both missing out on most of the PC exclusive content such as item drops, custom loadouts, new gamemodes, cosmetics, new weapons, and trading. The game was made Free to Play in 2011, at which point all players who had purchased the game before that point (either on its own or through the Orange Box) were awarded an exclusive hat named "The Proof of Purchase." Purchasing the Orange Box still awards the item.