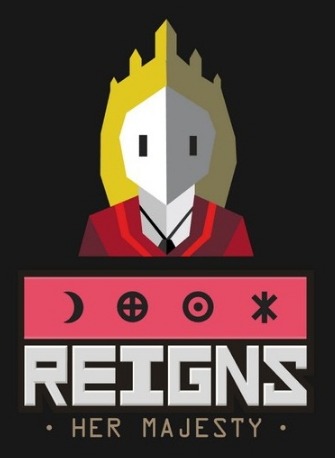 Reigns: Her Majesty is a strategy video game developed by Nerial and published by Devolver Digital. The game is a standalone sequel to 2016's Reigns. Set in a fictional renaissance world, it places the player in the role of a monarch who rules the queendom by accepting or rejecting suggestions from advisors. The game was released digitally for Android, iOS, Linux, macOS and Microsoft Windows in December 2017. Reigns: Her Majesty and its predecessor were released for Nintendo Switch, under the collective title Reigns: Kings & Queens, in September 2018.

A third entry in the Reigns series, Reigns: Game of Thrones, was released in October 2018.

The base gameplay is the same as in Reigns, but instead of playing as a medieval king, the player assumes the role of a queen. The player swipes left or right on a card depicting an advisor, in order to accept or reject their suggestion. Each decision will have a consequence, changing the balance between the four pillars of the society: the church, the people, the military, and the economy. The queen's reign ends whenever one of the four metrics becomes too high or too low, and the game continues with the player controlling their heir. There are between 1200 and 1300 different cards in the game, up from 800 in the original game.

Throughout the course of the game, the player may experience different kinds of events, which are scripted or caused by the player's decisions. Such events can have one-time or recurring effects on the game, such as causing the death of the next advisor if their suggestion is rejected.

A new gameplay element in Reigns: Her Majesty is the addition of items. The player can collect items throughout the game, and use them in certain situations. Items can bypass the choices offered and offer new options.

The game has been described as "smart and surprising" sequel with "fun and minimalist" mechanics, and an "improved and captivating story", but critics have said that it suffers from repetition. It has been compared to services such as Tinder because the player makes decisions by swiping left or right.