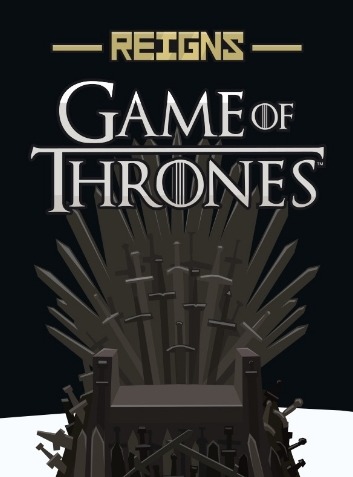 Reigns: Game of Thrones plays similarly to its predecessors. Described as a "swipe 'em up", the game allows the player to be one of the principals from the Game of Thrones universe, including Cersei Lannister, Jon Snow, Daenerys Targaryen, Tyrion Lannister, and Sansa Stark. In the game, the player is continually presented with questions regarding the ruling of their kingdom, where each has a binary choice: swipe left to accept or right to decline the proposal in question. Every choice can have an impact on four factors: military strength, religious favour, domestic popularity, and state wealth. Each card indicates which factors would be affected by either decision, but not how strongly or whether the effect would be positive or negative. If either factor rises to its maximum or falls to its minimum, the player's character dies and is succeeded by another character. The player begins the game as Daenerys Targaryen and progressively unlocks other characters throughout the gameplay. With each character, the player encounters different challenges based on that character's story arc. The game also includes minigames, such as jousting and tavern brawling.

The writing behind Reigns: Game of Thrones was primarily done by Alliot and his wife, Tamara. Leigh Alexander, previously the writer of predecessor Reigns: Her Majesty, provided the writing for the character Cersei Lannister. All writing was worked out in association with HBO to ensure that it stayed true to the original material. Due to the element of choice, the player is able to alter the outcome of events that are canon in the Game of Thrones TV series. To cope with the issue, the game's lore states that all events were visions of the character Melisandre, through which the game creates a "what if?" scenario.

Reigns: Game of Thrones was revealed by publisher Devolver Digital on 23 August 2018, through a trailer published on YouTube. Coinciding with the reveal, Devolver Digital announced that game would be released on 18 October that year, for Android via Google Play, for iOS via the App Store, and for personal computers (Linux, macOS and Microsoft Windows) via Steam. Pre-orders on all three distribution services were launched alongside the announcement. The game was released across all targeted platforms on the intended date. A version of Reigns: Game of Thrones for Nintendo Switch was released on 11 April 2019 via the Nintendo eShop.

Reigns: Game of Thrones was nominated for "Best Mobile Game" at both The Game Awards 2018 and the Game Developers Choice Awards, and for "Mobile Game" at the 15th British Academy Games Awards.