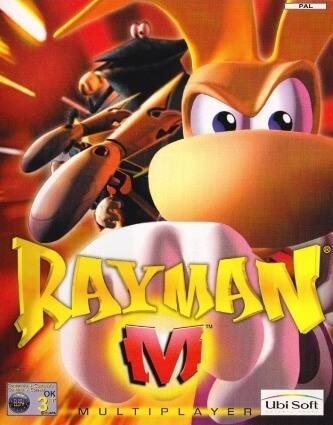 Rayman M (Known as Rayman Arena outside Europe) is a multiplayer party game developed and published by Ubisoft. The game encompasses two versions: the original version for the PlayStation 2 and Microsoft Windows, and the North American-exclusive GameCube and Xbox versions, with both releases featuring exclusive content. A spin-off in the Rayman series, the game retains a number of elements that previously appeared in Rayman 2: The Great Escape, such as similar controls, gameplay and level design. The game is split two game modes, both supporting up to four players: on-foot racing and arena-based battles.

The PlayStation 2 and Microsoft Windows versions require the player to complete all five leagues (Beginner, Advanced, Expert, Extreme and Bonus) to beat the game; the GameCube and Xbox versions require the player to complete the four main game modes (Obstacle Racing, Time Attack, Total Fight and Freeze Combat) on all three difficulties (Beginner, Pro and Master) to beat the game.

A remake, titled Rayman Rush, was released for the Sony PlayStation in 2002, which only features the racing portions of the game.

Rayman M received "mixed or average" reviews, according to review aggregator Metacritic. GameSpot criticized the lack of gameplay variety, stating that "You typically need only two laps on a course to figure out a path through the level that will defeat the computer racers."

For the PC platform, Rayman M received "negative" reviews according to Metacritic.