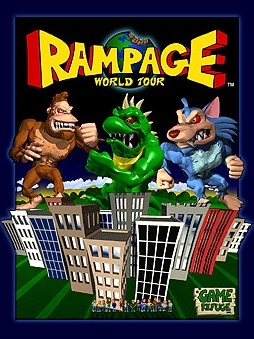 Rampage World Tour is a video game released in 1997 and is the second game in the Rampage series. The game was developed as an arcade game for Midway Games by Game Refuge Inc. designers Brian Colin and Jeff Nauman, who conceived and designed the original in 1986. It was ported to the Sega Saturn, Nintendo 64, Game Boy Color, PlayStation, Microsoft Windows and has been re-released on Midway Arcade Treasures 2 as well as being included in Rampage: Total Destruction.

George, Lizzie, and Ralph have been released due to an explosion at a Scumlabs facility. The trio begin to destroy all of Scumlabs' bases scattered throughout the world and kill its employees. In the last levels, Scumlabs CEO Eustace DeMonic turns himself into a monster in an attempt to combat George, Lizzie, and Ralph, but is defeated during a battle on a lunar base. After this, the only surviving Scumlabs employee Dr. Elizabeth Veronica tries to disintegrate the monsters with a ray gun on her spaceship, but it only shrinks them to a miniature size, and they wind up inside her ship. George and Ralph pose on the shelves, while Lizzie bounces atop of Veronica's breasts (though the latter portion is censored on home ports.)

Like in the first Rampage game, the goal of every stage is to destroy all the buildings in each city while avoiding or destroying the military forces. If the player takes too long in destroying the city, jets will fly in and bomb the remaining buildings, ending the stage with a lower score.

In the first level, Peoria, a tourism billboard cycles through different regions in the country (Northeast, Southwest, etc.). Destroying the billboard when it is showing one of these regions will send the player in that direction. Players may also choose to eat or ignore the "World Tour" powerups and control which country they can visit. After getting a World Tour power-up, the next few levels will take place in a foreign location until a Scumlabs plant is destroyed. Purple radioactive waste temporarily transforms the player into a super monster known as V.E.R.N. The game will not end until every Scumlabs city has been destroyed, which may cause some erratic traveling around towards the end of the game (including multiple world tour trips if the players have missed or purposely kept from getting world tour flags).

PlayStation Pro gave the game 4 out of 10.

Charles Ardai of Computer Gaming World noted that the PC port of the game had performance and graphics issues when played in full-screen mode. Best performance was achieved when the screen was set to a postcard-sized frame. He found the action to be basic, although there is a variety of animation. He added that it is "suffused with all the monster movie fun that was conspicuously lacking in the recent Godzilla film".

Next Generation reviewed the arcade version of the game, rating it two stars out of five, and stated that "Rampage World Tour seems aimed at satisfying gamers' yearning for past titles like Space Invaders or Pac-Man. Fair enough, but all this remake will accomplish is to make gamers yearn for the original more than ever."

Next Generation reviewed the Nintendo 64 version of the game, rating it two stars out of five, and stated that "Despite the three-player mode, no amount of graphic flash or nostalgia can improve a style of gameplay whose day has passed."