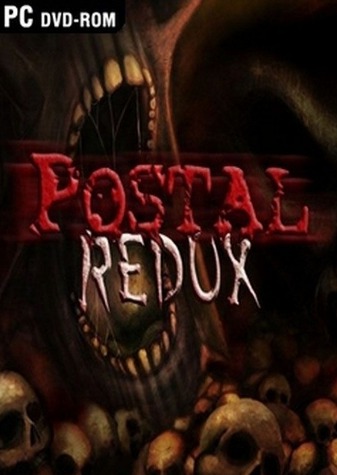 Postal Redux (stylized as POSTAL Redux) is an isometric shoot 'em up video game developed by Running with Scissors. It is a remake of the first installment in the Postal franchise and its expansions in Unreal Engine 4, and contains high-definition redesigns of levels, remastered voice acting and sound effects, updated controls, and additional content not seen in the original.

Aside from graphical enhancements and updated sound design, Redux contains many notable differences from the 1997 installment. In addition to this the game has been updated several times with the current update being 4.0

On June 2, 2017, during a podcast, RWS member Michael Jaret-Schachter announced a Linux release for the game, also stating that the PS4 version would not be released due to financial difficulties.

A new addition that replaces the old Gauntlet Mode, Rampage is a score based mode with remixed levels from the campaign that encourages a more aggressive playstyle with the main goal to get a high score. This is based on how many kills one gets, how much ground has been covered, the use of multiple weapons, and how fast the player reaches the exit. The player is graded at the end from "F" to "A+". Along with this is new diary quotes and a new ending made for this mode.

Along with the graphical enhancements, several weapons have been rebalanced (such as the machine gun from the original referred to as the "SMG" in Redux has a noticeably higher rate of fire with a decreased range penalty and the shotgun and spray cannons no longer share ammunition, with the spray cannon now using unique green shells as ammo) and throwable weapons are now a separate equip with their own fire button. A new weapon, the revolver, a slow-firing handgun with high range and accuracy as well as damage was also added to the game.

Difficulty has also been rebalanced into four distinct difficulties (replacing the old 1 to 10 scale used in the original): Easy, Normal, Hard, and Nightmare.

Every weapon now has its own unique execution animations for downed enemies, as opposed to the Dude switching to the SMG for executions. In addition, each weapon also has its own suicide animation, instead of the dude using the SMG to kill himself.

Two new levels are added to Redux, the Carnival and The End.

The Carnival is a new level added between the City and Central park level. Along with this is a new NPC: Clowns. These come in both violent (carrying balloon weaponry) and non-violent varieties.

The End is a new ending level which replaces the Elementary School. This ending shows the Postal Dude about to massacre a church, but finds it locked, so he heads past it into a green field. As he progresses through the field, it slowly deteriorates in a hellish manner, and he eventually comes across a funeral. When he notices the funeral, he realizes that it is his own, and begins to suffer a mental breakdown, later waking up to find himself in a mental institution. The ending cutscene, alongside the closing remarks from the doctor, are the same as the original Postal. The doctor in this version is voiced by Corey Cruise, who provided the voice for the Postal Dude in Postal III.

Along with the new default ending and the Rampage ending, additional ending are added when one beats the game in Co-op mode, Super Delivery Mode, or while playing on Hard or Nightmare difficulty modes (the latter two being minor changes to the End).

Added with the 3.0 update, the game allows the player to play as The Antagonist (referred to as Not Important) from the Postal inspired Hatred and a new character known as Smiley the Clown in any of the modes when unlocked. This is done by typing in a cheat code. Along with this, new special effect filters are added to the options menu which alter the graphics of the game in certain ways (one of which being to make the game resemble Hatred).