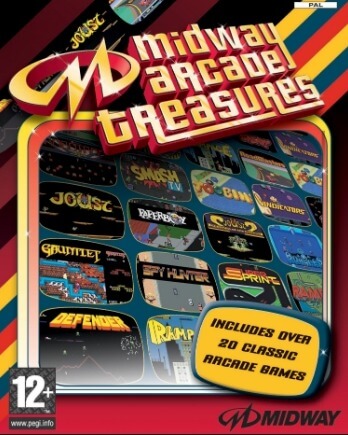 Midway Arcade Treasures is a video-game compilation of 24 arcade games, emulated from the original PCBs. The overall release was developed by Digital Eclipse and issued by Midway Games for the PlayStation 2, Xbox, GameCube, and Microsoft Windows.

After Midway's bankruptcy, Warner Bros. owns the rights and released another arcade compilation called Midway Arcade Origins in 2012 for the PlayStation 3 and Xbox 360, which includes 29 select games from MAT 1 and 2 plus Super Off Road from 3. It also contains Vindicators Part II which replaced the original Vindicators from Midway Arcade Treasures.

This game was later re-released as Midway Arcade Treasures 1, the title and packaging being changed slightly to match the second and third games in the series. Despite this, the games themselves remain the same.

The compilation plays similarly on all three consoles; however, the Xbox version has the extra ability to upload scores to an online scoreboard. The special features on each version of the game are the same. These include game histories, developer interviews and other documents. This compilation is a combination of the games included in Williams Arcade's Greatest Hits, Midway's Greatest Arcade Hits, and Arcade Party Pak for the original PlayStation and PC and each contain exactly the same extras from those collections. Additionally, there are eleven more games included that are not found in those collections.

While the PlayStation 2 and GameCube versions can be played on the earliest models of the PlayStation 3 and Wii respectively (due to their backwards compatibility), the Xbox version is not Xbox 360 compatible.

Midway Arcade Treasures received mixed, but generally positive reviews from reviewers at GameRankings with a 75.31% of the GameCube version, 73.86% of the PlayStation 2 version, and 75.02% of the Xbox version. Criticisms are the poor menu layout, slowdown in Smash TV, for the documentaries and interviews having video quality that is grainy and unrestored, as well as the documentaries and interviews being rehashed from previous Midway collections.

Midway Arcade Treasures also received mixed and positive reviews from review aggregator Metacritic, with a score of 76 for the PlayStation 2 version, a score of 74 for the Xbox version, and the lowest being a score of 72 for the GameCube version. The reviews were mostly the same as GameRankings, stating the games positive and negative points. Many of the complaints were based on the DVD content having poor, and stuttering quality, the menu being not pleasant to look at, and some of the games being difficult to control (with Vindicators as the main point of focus). Reviewers did say the collection was worth getting, even if the games didn't entice you at first.

In 2012, a remake of the collection was released: an application called Midway Arcade. Available for iOS, it is the first of the series to be published by Warner Bros. which acquired all the assets due to Midway's bankruptcy. The iOS version does not include all games released on this disk.