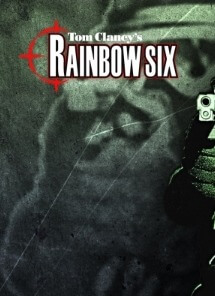 Tom Clancy's Rainbow Six is a tactical shooter video game and the first in the Rainbow Six series. It was developed and published by Red Storm Entertainment in 1998 for the PC. It was ported to Mac OS, Nintendo 64, PlayStation, Dreamcast, and Game Boy Color. An expansion pack, Tom Clancy's Rainbow Six Mission Pack: Eagle Watch, was released on January 31, 1999. On October 29, 2018, Sony revealed that the PAL version of the game would be one of 20 games pre-loaded on the PlayStation Classic (excluding Japan, Taiwan and Hong Kong), which was released on December 3, 2018.

Rainbow Six is a tactical shooter, which focuses more on stealth and tactics than on sheer firepower, exploring the lethality of a single bullet. To add to the realism, all in-game characters, terrorists, hostages and Rainbow operatives, can be wounded or dispatched in just fractions of a second with only one or two bullets. Tools such as thicker body armor, automatic rifles, and grenades have little value before the player grows accustomed to the gameplay.

Before each mission is a planning stage, during which the player is given a briefing, and then chooses the operatives to be involved in the mission, their weapons, equipment and uniform/camouflage. During this step, the player pre-established orders and waypoints. The planning stage determined elements such as the path the AI-controlled squads would follow during the mission, as well as where they will deploy devices such as flashbangs or door breaching charges.

Successful missions often last just minutes, but may require dozens of repetitions and planning changes (many more for beginners). During gameplay, the player controls only one team member directly, and can see stats for that member and all units on the heads-up display. Teams not under player control follow the orders given to them in the planning stage. The player can take control of any living operative at will, making them the leader.

The game forms a campaign that is a series of scenarios, with the plot being advanced in the mission briefing of each scenario. Any casualties that occur during a mission are permanent, so the deceased cannot be used in future missions. Consequently, many players replay missions that are technically successful merely to reduce the number of casualties.

Online multiplayer gaming was popular on the Mplayer.com and Zone.com services and for a time featured a thriving competitive clan based community with numerous independent ladder style leagues.

Unlike the other versions, the PlayStation version actually showed the gun being held in the player's hands.

Rainbow Six is set in 1999 to 2000. Rainbow is a newly created multinational counter-terrorism unit, composed of elite soldiers from NATO countries, Brazil, Austria, Sweden, Australia, Russia, and Israel, formed to address the growing problem of international terrorism. The organization's director is John Clark, and the team leader is Ding Chavez. The term "Rainbow Six" refers to the director of the organization, John Clark.

Soon after its inauguration, Rainbow finds itself responding to a series of seemingly unrelated terrorist attacks by the Phoenix Group, a radical eco-terrorist organization. Throughout its investigation, Rainbow is assisted and advised by John Brightling, chairman of the powerful biotechnology corporation Horizon Inc.

However, Rainbow eventually learns that the Phoenix Group is actually a front for Horizon Inc itself. Brightling's company is developing a highly contagious strain of the Ebola virus called "Brahma", adapted from a strain killing Central African cattle (called "Ebola Shiva" in the novel) with the ability to kill every human being on the planet. In order to protect "mother nature", John Brightling is planning to kill most of the human race, sparing only Brightling's chosen few, who will re-emerge and rebuild the planet into a scientific and environmentally-friendly utopia. To achieve this goal, he has used the scattered terrorist attacks to create fear of terrorism, which he then exploited in order to get a security contract for his own private security firm at the Olympic Games. Brightling's plan is for his "security personnel" to unleash the virus at the games, spreading it to all the countries of the world.

Rainbow succeeds in preventing the release of the virus at the Olympics, but Brightling and his collaborators retreat to their Horizon Ark facility in the Brazilian jungle, from which they had originally planned to weather out the global holocaust. Rainbow infiltrates the facility, killing all of Brightling's collaborators and capturing Brightling himself.

The Sum of All Fears
hit
upd
new