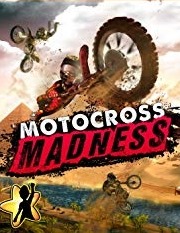 Motocross Madness is a motocross racing video game developed by Rainbow Studios and published by Microsoft.

The game is known for its realism, including terrain, audio, and "bone-chilling" motorcycle wrecks. If the player is in Stunt mode, goes out of bounds, and gets on a large cliff, an "invisible slingshot" will cause the player and the bike fly across while a funny sound plays until both objects will hit the ground.. The "invisible slingshot" effect was also used in the game ATV Offroad Fury, also created by Rainbow Studios

In the United States, Motocross Madness sold 35,922 copies during 1998. These sales accounted for $1.54 million in revenue that year.