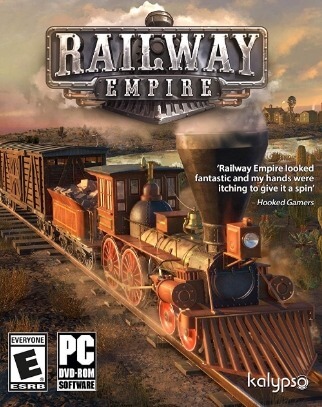 Railway Empire is a tycoon simulation game released on 26 January 2018 for PlayStation 4, Xbox One, PC and Linux. The game was developed by the German studio Gaming Minds Studios and produced by Kalypso Media. In Japan, the physical copy of the game was distributed by Ubisoft in May 2018.

Railway Empire's base game takes place in the United States from 1830 to 1930. As of 1 March 2019, there are several DLC packs players can buy to unlock additional regions, with new locomotives included. These include the Great Lakes region (southern Canada and northern US), Mexico, South America, Great Britain & Ireland, Germany and France. The player can build a large network of railway lines and buy various locomotives to serve cities and industries - growing cities in the process, and hire railway personnel for both train operations and office positions, all with individual bonuses and personality types. The game has several game modes like campaign mode, scenario mode, free mode and sandbox mode.

In the campaign mode, the player plays against different competitors. In the Scenario mode, these competitors are selectable and playable characters with specific gameplay bonuses.