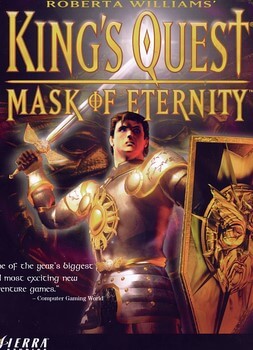 King's Quest: Mask of Eternity (also known as King's Quest VIII: Mask of Eternity) is a hybrid point-and-click adventure and action-adventure developed and published by Sierra Studios in 1998. It was the eighth official game in the King's Quest series, the first and only game in the main series where the main character is neither King Graham nor a member of his family, as well as the first in the series to use a full 3D engine as opposed to the 2D cartoon or pixel style of the earlier games and the first to omit the sequel numbering system on box artwork and title screen.

The game combines a point-and-click single multipurpose context-sensitive cursor from King's Quest VII, and a variation of the standard adventure game item inventory along the top. It also includes information about total mask pieces collected and total gold coins. A menu along the bottom of the screen includes information concerning level, character experience, curative items, potions offering different abilities, the two current weapons, and armor. On the right side of the menu is the interface for the grappling hook item and rocks.

The cursor is dynamic, and can change into four different types depending on actions. The primary cursor is the Play Cursor, which functions much like the cursor in King's Quest VII. It is used to look, take, talk and do. Like in King's Quest VII, picking up an item from inventory switches the game to an Inventory Cursor. This cursor shows an image of the item picked up, and allows the player to click it on something else. Next is the Sword Cursor, much like the one seen at the end of King's Quest VI (during the Alhazred sword battle). It is used for combat in the game. The final cursor is the Arrow Cursor, which lets the player click on enemies from a distance, and fire projectiles.

The game was designed primarily to be played in third person mode, but also offers a first person mode. The first person mode was primarily put into the game to allow players to better look around or get closeups of things the screen. But it can be used to play the game, except during character interactions. There are three difficulty levels for combat (Easy, Normal, and Hard).

The story begins in Castle Daventry with King Graham and his minister talking about the every day affairs of running the country, when the Magic Mirror activates in front of them showing them a bad omen. They witness Lucreto the archarchon of the Realm of the Sun destroy the Mask of Eternity and releasing a wave of energy. The mirror goes on to show the kingdom's only hope, the lowly peasant and knight, Connor of Daventry from a nearby village. He is shown chatting with his neighbor Sarah, when a storm arises and a piece of the mask falls at his feet. He picks it up, and turns around to find Sarah had been turned to stone. The unleashed magic energy turned all mortals in the world to stone, including King Graham with the Mask piece apparently shielding Connor from sharing this fate. With that the Mirror ends its vision.

Early on in the game, the half-stone wizard that Connor encounters tells him about the Mask of Eternity, Connor's destiny, and conjures for him a magic map that shows all explored areas and allows Connor to teleport between lands once the teleportation sites in each land (except for the Realm of the Sun) have been discovered. With knowledge of his Quest, Connor made his way to Castle Daventry to check on his liege and the royal family, finding Graham and the rest of the inhabitants of the castle turned to stone. He vowed that he would save king Graham and queen Valanice, their family, and the rest of the inhabitants of Daventry, or die trying.

The game ends with Connor rising to the top of the Realm of the Sun with the restored Mask. A beam of blue light shines on the Mask, seeming to restore its power and it sends out a wave of energy that restores everything including the Kingdom of Daventry to life. Sarah is restored. King Graham newly restored looks on proudly at his hero in the Magic Mirror. The game ends with the Archons being released from their stone prisons and joining Connor who triumphantly lifts his sword into the air.

All games from the serie "King's Quest"