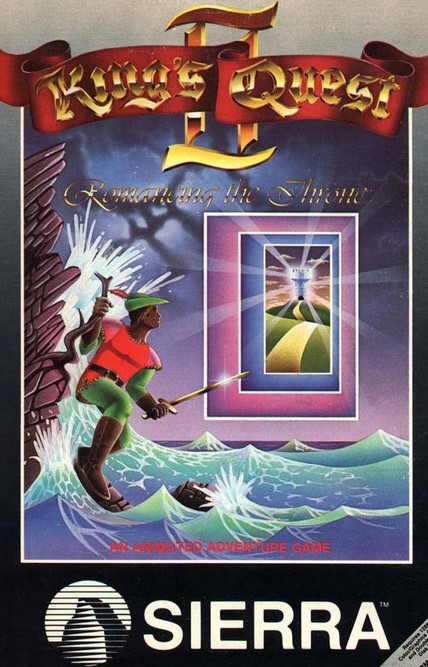 King Graham travels to Kolyma to find a bride. Daventry's new prime minister Gervain convinces Graham to look outside of Daventry for a bride, based on an image Graham saw in the magic mirror. While there he must overcome the Black Cloak Society, and stop the witch Hagatha and The Father, and save both his Kingdom and Kolyma. He learns that Gervain is really The Father, who had planted the image in the mirror, to lead Graham to Kolyma in an attempt to kill him there. This was done in hopes of him becoming the new King of Daventry, as he was the next in line to the throne, in order to search for a powerful artifact called "The Item".

King's Quest II was unofficially remade in 2002 when AGD Interactive, then known as Tierra Entertainment, released the fan-made King's Quest II: Romancing the Stones under a fan license by Vivendi. The game uses a point-and-click interface functionally identical to an advanced SCI game engine, VGA graphics and digital sound, including full speech for all characters. Notably for an unofficial, fan-made project, the game's protagonist King Graham is voiced by Josh Mandel, who also voiced the part in Sierra's official CD-ROM full-speech versions of King's Quest V and VI. In contrast to the group's remake of King's Quest I, a content-wise identical presentation upgrade, King's Quest II VGA redesigns the original game to adding a rewritten plot expanding on the 1985 version (although it changes several points of the plot, 'Dracula' is now 'Caldaur' a character who redeems himself with Graham's help, and the 'Monk' is now 'Llowh'wof', the leader of a werewolf clan who plots to keep Kolyma trapped in a dark age), a number of puzzles, new characters and locations including a town, and references to future King's Quest games. In March 2009, AGD Interactive released version 3.0 of this game. This version showcases redrawn backgrounds and dialogue pictures; the voice-acting was also dramatically improved and, thanks to fan feedback, many problems were attended to.

King's Quest II VGA was never meant to be anything other than a "retelling", or a fanfic with a soundtrack and an interface attached to it. One of AGDI's developers even mentioned on the forums he'd probably have kept the game more 1:1 if he had known Vivendi was going to grant them official permission so people wouldn't think they were trying to create an alternative canon. He said he was personally happy that that didn't happen.

Notable are references to Graham's past and also future, showing his dilemmas and thoughts during King's Quest III: To Heir Is Human (AGD Interactive), while his infant boy had been lost, his daughter abducted and Daventry was ravaged by the three-headed Dragon. Notable is the appearance of Connor from King's Quest: Mask of Eternity, meeting King Graham for the first time.

The character of The Father is introduced. He is the leader of the Black Cloak Society, a group of evil mages, wizards, and the nemesis of Graham, but his role is not revealed in full.

The game is more of a retelling or reimagining of the story than a simple remake, in many ways an all new story.

All games from the serie "King's Quest"