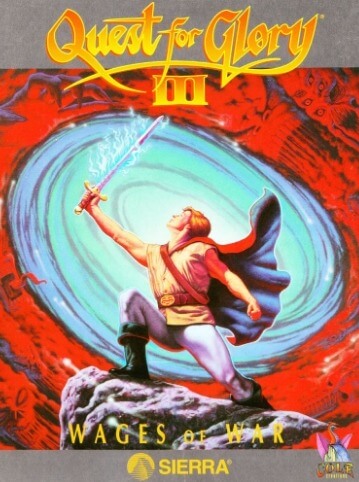 Quest for Glory II hinted that Ad Avis would return in this installment of the video game series. However, the Coles didn't think they could reach a new audience with a game that was significantly darker in tone than previous games in the series. Therefore, Quest for Glory III: Wages of War was created instead with the game just hinting at the whereabouts of Ad Avis and saving that particular plotline for Shadows of Darkness, which was changed to the fourth in the series.

The game was re-released on Steam with support for Windows.

Rakeesh the Paladin brings the Hero (and Prince of Shapeir) along with Uhura and her son Simba to his homeland, the town of Tarna in a jungle and savannah country called Fricana, which is inspired by central African ecosystems. Fricana is home to Liontaurs, half-human, half-lion creatures.

The Liontaur city of Tarna is on the brink of a war; the Simbani, the tribe of Uhura, are ready to do battle with the Leopardmen. Both tribes have taken a sacred relic from the other tribe and refused to return it before the other does. The Hero must prevent the war and then thwart a demon who may be loosed upon the world.

The Hero earns membership in the warring tribes, and leads his newfound allies into battle against the demon wizard. As soon as the battle is won, the Hero suddenly disappears into darkness.

Just like the previous installments, this game offers three 'standard' character classes: Warrior, Magic User and Thief. However, a 'hidden' class can be opened: a Paladin. In the finale of the previous game a character who has proved honorable enough is named 'Paladin' by Rakeesh, and can be imported to Quest for Glory III as such. However, any saved character of any other class can be imported as a Paladin as well, preserving all of his skills acquired in the previous games. Such system allows to create a cross-class characters, so that Paladin for instance can use his own specific abilities along with the spells intended for Magic User without any penalties.

The Fighter class is favoured in Wages of War, and has access to the Trials of Simbani quests. Magic-Users are treated with hostility, and have but a sidequest which involves creating a magical staff and challenging the leopardman shaman, while thieves are relegated to just two incidents which are particular to them and in which they can use their class-specific skills.

In a departure from the first two games, Quest for Glory III features an "overworld" screen where all important cities and landmarks are represented in miniature, instead of the series of interconnected screens that the other installments of the franchise used. Travel across this overworld is subject to random encounters with enemies, which the player character must defeat in battle or escape. While traveling from one landmark to another, time passes rapidly, and the player is prone to random encounters, most of which are hostile. The stealthy Thief character is less prone to these encounters. Some random encounters are not hostile, and others are silly yet nevertheless helpful in one way or another, such as the Awful Waffle Walker (meant to save the Hero from starvation), and Arne the Aardvark (possible to question for hints).