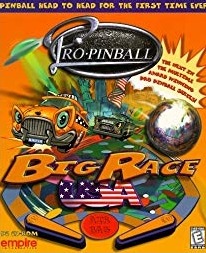 
Pro Pinball: Big Race USA is an action video game developed by Cunning Developments, published by Empire Interactive and distributed by Take-Two Interactive for Microsoft Windows and PlayStation. It is the third game in the Pro Pinball series, and is themed around travelling around the United States in a car.

It is notable for having a lot more "simulation" features than its predecessor Pro Pinball: Timeshock!, such as ability to configure table angle, flipper strength and how "worn" the table should appear to be. It also features a skill level setting, perhaps in response to Pro Pinball: Timeshock!'s difficulty. It also has improved graphical features including a subtle texture on the ball (so you can see how the ball is spinning) and motion blur.

Big Race USA received the "Special Award" for "Quick-Fix Gaming" from Computer Gaming World in 1999. The editors wrote that it "set a new standard in PC pinball" and "proved so incredibly addictive it might as well have shipped with a set of cranial meat hooks."