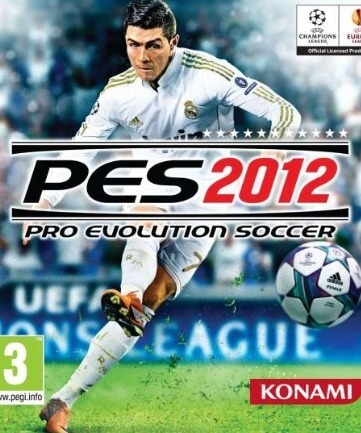 Pro Evolution Soccer 2012 (PES 2012, known as World Soccer: Winning Eleven 2012 in Asia) is a video game which is the eleventh edition in the Pro Evolution Soccer series developed and published by Konami with production assistance from the Blue Sky Team. Lionel Messi, who was the cover star for the series since PES 2009, was replaced by PES 2008 cover star Cristiano Ronaldo, while Shinji Kagawa replaces Messi as the cover star for the Japanese version. The US and Latin American cover features the back then Santos player Neymar and Cristiano Ronaldo.

On July 28, 2011, Konami confirmed that PES 2012 was going to be released for Xbox 360, PlayStation 3 and Microsoft Windows on October 14, 2011 in Europe and October 6, 2011 in Japan. At Gamescom 2011 it was announced that the PlayStation Portable and PlayStation 2 versions would follow on October 28, 2011 and the Wii on November 4, 2011. The publisher has also confirmed that versions for Nintendo 3DS and iOS formats are also in development, with firm dates to follow. PES 2012 was succeeded by Pro Evolution Soccer 2013.

PES 2012's gameplay is primarily a refinement of PES 2011, with many improvements and changes in areas such as artificial intelligence, speed, animation, and physics.

Among the new features is the Teammate Control system, where a secondary player may be controlled, either during play, or at a set piece or throw-in. This allows players to be placed precisely, make runs, and shake off markers before calling for the ball. Manual and assisted versions of the feature are available for varying degrees of difficulty and control.

Refereeing has been improved and includes a full implementation of the advantage rule, with the referee pulling back play for bookings after the ball goes out of play. The "catch-up bug", where defenders would catch dribbling attackers too easily, regardless of the attacker's pace, will be addressed. Gameplay is more fluid, with better response when controlling the ball, and goalkeepers have been improved with new animations and generally more reliable goalkeeping performances. Artificial intelligence has been improved over previous PES games, for example AI players will play more thoughtfully when defending rather than simply applying pressure, and AI teammates will make more intelligent movement decisions.

Thanks to an exclusive deal with UEFA and CONMEBOL, the UEFA Champions League, the UEFA Europa League, the UEFA Super Cup and the Copa Santander Libertadores are fully licensed. The tournaments are integrated into the new mode, Football Life, which features a Master League mode and a Become a Legend mode, and for the first time, a Club Boss mode. The Football Life mode also includes a Master League Online mode, however, fan favourite 2V2 Ranked Matches have been removed from the Xbox 360 version due to "internal decisions". Like previous versions, there is also a separate two leagues with 18 empty teams (PES League and D2 League), each of which can be edited fully. All the teams are entirely fictional. The UEFA Europa League, the UEFA Super Cup and the PES and D2 Leagues are features not included in the PSP version of the game.