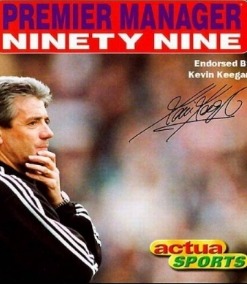 Premier Manager: Ninety Nine – Total Football Management is a soccer management simulation game, for PC, PlayStation and Nintendo 64 (with the N64 version known as Premier Manager 64). It was released only in Europe in 1999. It is part of the Premier Manager series and is endorsed by Kevin Keegan.

Premier Manager: Ninety Nine is a football management simulation game that puts the player in charge of a team of their choice from the Premier League to the third division as it was known at the time. The player must manage the team's tactics, formations and training. The player must also manage the financial side of running a football club so to be able to afford to purchase football players for the team.

Premier Manager uses the Actua Soccer engine to display football matches. At the time this was a new feature and set Premier Manager apart from other football management games. Using the engine allows the player of the game to view the match in great detail and assess where tactical changes need to be made.

Premier Manager 64 was only released in Europe.