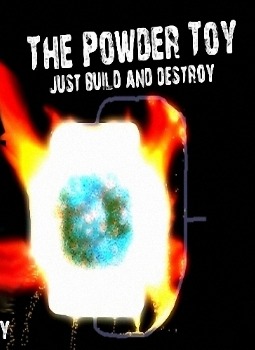 The Powder Toy is a falling-sand game created by Stanislaw K. Skowronek, jacob1, and various contributors to the project on GitHub. It is a free and open-source software licensed under the GNU General Public License version 3.0.

It has a total of 185 different in-game materials that have varying functions, alongside heat, Newtonian gravity, pressure, water equalization, and various modes to change how the game looks.

The Powder Toy, like most falling sand games, is a sandbox video game that allows users to create things in-game to share with others. It is also possible to create new content for the game by using Lua to create new elements, tools, and content.

A public server for sharing in-game creations is provided as part of the game itself, allowing users to share anything that abides by the rules. Content is rated using upvotes and downvotes, and can be reported to the moderators if it breaks the on-site rules or plagiarizes other works.

The Powder Toy's community is officially composed of two parts: the forums, which are hosted on the official site of the game; and the IRC channels, located on Freenode.

Multiple mods for the game have also been created, for example, jacob1's mod, PowderSim and The Unrealistic Science Mod, alongside a full port of the game to RetroArch's libretro.

The game has been noted by publications as a valuable tool for teachers and their students, receiving praises such as being called a "great science game" for its potential use as a learning aid.