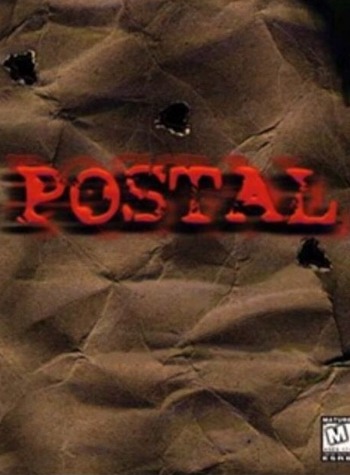 Postal is an isometric top-down shooter video game developed by Running with Scissors and published by Ripcord Games in 1997. A sequel to the game, Postal 2, was released in 2003. Director Uwe Boll bought the movie rights for the series and produced a film of the same name. A March 2001 re-release of the game, called Postal Plus, included a "Special Delivery" add-on. A remaster of the game, Postal Redux, was released for Microsoft Windows on May 20, 2016. At the end of 2016, the game's source code was released.

Postal is a 3D shooter with mainly isometric, but also some top-down levels featuring hand-painted backgrounds. Gameplay and interface are similar to first-person shooters of the time in most, but not on all counts:

The game follows a man who has been evicted from his home. He believes that the United States Air Force is releasing a poison gas in his town that only he is unaffected by. He fights his way to the Air Force Base through various areas. During the progress of the game, a voice in the protagonist's head (voiced by Rick Hunter) can be heard taunting his victims.

After massacring the Air Force Base, he is then shown trying to massacre an elementary school, however, his weapons have no effect. He then has a mental breakdown and wakes up to find himself in a mental asylum. A doctor gives a report on the protagonist's mental state, suggesting that the stress of urban life may have caused him to "go postal", over images of a hellish corridor, the protagonist curled up in the fetal position in his cell, a close-up of his face (albeit covered by bindings) and the door to his cell, Cell 593. The final remarks are: "We may never know exactly what set him off, but rest assured we will have plenty of time to study him".

After the credits, manic cackling can be heard, suggesting that the protagonist may have somehow escaped the asylum.