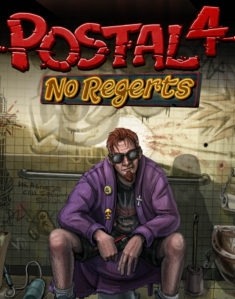 Postal 4: No Regerts is a first-person shooter video game developed by Running with Scissors, who were also responsible for the first two games in the Postal series, Postal and Postal 2. It was released on October 14, 2019 for Microsoft Windows through Steam's Early Access program, a decision which was made to acquire funding for the project and to involve the Postal community in the game's development process. Running with Scissors have described the game as the "true sequel" to Postal 2, contrasting it with Postal 2's unsuccessful 2011 sequel Postal III, which was panned by critics and players, as well as being "disowned" by Running with Scissors. The game is currently in the alpha stage of its development, and most of its planned features have yet to be implemented.

Postal 4 borrows many of its gameplay features from its predecessor, Postal 2. For example, the game is centered around different "errands" that The Postal Dude must complete each day, which so far include being a prison guard, a sewer worker, and an animal catcher on Monday. It also returns the series to a first-person perspective, which was eschewed by Postal III in favor of third-person. Planned gameplay elements include additional weapons, optional "side errands", different outfits for the Dude, and cooperative multiplayer.