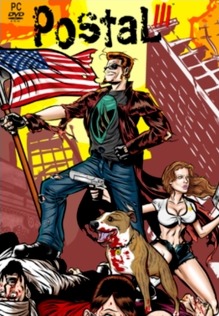 Postal III is a third-person shooter developed by Trashmasters and Running with Scissors, and published by Akella. It is the third game in the Postal series, being the sequel to Postal 2, telling the story of the Postal Dude's adventures in a town named Catharsis, following directly from the ending of the second game in which the town of Paradise was destroyed by a nuclear bomb. Postal III was released for Microsoft Windows in December 2011. Ports for OS X, Linux, PlayStation 3, and Xbox 360 were announced, but ultimately canceled.

In Postal III, the Postal Dude emigrates to Paradise's sister town of Catharsis as he previously blew up Paradise with a nuclear bomb. Due to the economic meltdown, the Dude drives into town and becomes stranded because he can not afford a tank of gas. He must then find work and do various odd jobs to escape the town.

Through the course of the game, the player can choose one of two paths: the "bad path", which includes joining in on the schemes of Mayor Chomo and Uncle Dave, or the "good path", which involves the Dude joining the Catharsis Police force. The game plays out in a fairly linear and cinematic way, although the player's actions affect the outcome of the story and the game. Although the "good path" is more difficult to play, it offers more story line and a longer campaign.

There are three endings to the game as Postal Dude must escape from the impending Venezuelan invasion with Hugo Chávez leading the charge.

Regardless of the endings, the Postal Dude's final words are "I regret nothing!"