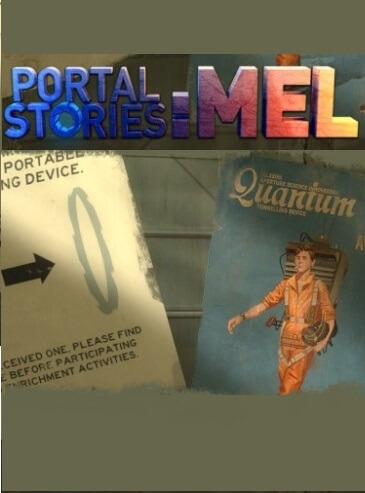 
Portal Stories: Mel is a single-player mod of Portal 2 developed by Prism Studios. The mod was released on June 25, 2015, for Microsoft Windows, OS X and Linux systems, available freely to users who own Portal 2 on Steam.

Like Portal 2, Portal Stories: Mel is a puzzle-platform game played from the first-person perspective as the player-character Mel. Shortly into the game's story, the player acquires a prototype version of a portal gun, which allows the player to create a connected opening on two different flat surfaces. This allows for accessing out-of-reach areas, passing objects, light, laser beams, and other matter through the portals, and using the portals as a means of "flinging" Mel or other objects across a level. These lead the player to various puzzle chambers that are required to be solved in order to access the exit point and proceed forward. The player-character can die by being shot repeatedly by automated turrets, falling into contaminated water, and other similar environmental hazards, but this will simply return the player-character to a previous checkpoint. Portal Stories: Mel adds a few new features such as water putting out fire, electrified water and a deadly version of the emancipation grill as well as using familiar puzzle elements from previous games in new ways, such as tractor beams, light bridges, and paint gels. There are a total of 22 levels in the game which the developers expect would take players from 6 to 10 hours to complete.

The game starts when Mel, an Olympian from the 1936 Summer Olympics (said to have taken place in Nuremberg rather than Berlin), arrives by tram at the Aperture: Science Innovators headquarters in Michigan. She then enters the massive underground complex as a volunteer test subject on October 14, 1952. Aperture's CEO, Cave Johnson, speaks to Mel through prerecorded messages via intercom, informing her that she will take part in one of their smaller tests, the Aperture Innovators Short Term Relaxation Vault.

After the test goes wrong and she is put in suspension for decades, Mel is woken up and finds much of the facility in disrepair. She encounters a Cave Johnson impersonator telling her nothing is wrong and that she is still in 1952. Later on, it is revealed that the voice talking to her is a maintenance core named Virgil, who offers to help her escape from the facility if she helps him get back on a management rail he fell off of. After helping her to obtain the portal gun, Virgil guides Mel through the remnants of the old facility, explaining that the destruction of GLaDOS (from the events of Portal) has caused most of the control systems in the facility to falter.

They continue upwards but learn that due to the reserve power coming on, a prototype security system, AEGIS (Aperture Employee Guardian and Intrusion System), has become active in the absence of GLaDOS and is tracking them through the facility, trying to eliminate them after mistaking them first as unregistered life forms then as potential threats to the long dead scientists. Virgil realizes the only way for Mel to escape is to disable AEGIS.

After traveling through some old and overgrown test chambers, the duo eventually arrive at AEGIS's central core. After a battle with the AI, Mel enters the code to shut down AEGIS, but not before finding out that AEGIS was attempting to destroy GLaDOS as well. Virgil leads Mel to the elevator, has her destroy the portal gun, and says his goodbyes as she ascends to the surface. Mel opens a door leading to the outside world to find the same town she walked through decades ago to get to Aperture both modernized and in ruins.

In a post-credits scene, AEGIS has enough power left to initiate one final fail-safe: waking up the test subject Chell, the main protagonist of the Portal games, by draining the reserve power so she can escape, setting up the events of Portal 2.