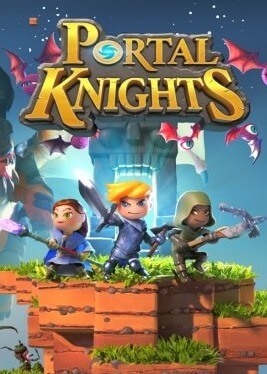 Portal Knights is an independent survival action role-playing video game developed by Keen Games and published by 505 Games. It was first released on Steam on 25 February 2016 and subsequently released for PlayStation 4, Xbox One, Nintendo Switch, Android, and iOS.

Portal Knights was first announced by publisher 505 Games on 4 February 2016. It was released into Steam Early Access on 25 February 2016.

The game left Early Access on 18 May 2017 and was also released for PlayStation 4 and Xbox One on the same day. It was later released on the Nintendo Switch eShop on 23 November 2017, and then through retail on 13 February 2018.

The game's first mobile release took place on 6 December 2017, when it was released for both Android and iOS.

In January 2019, the game was featured as one of the free PlayStation 4 games for PlayStation Plus subscribers.

Portal Knights combines exploration and building elements with role-playing aspects. It provides a multiplayer sandbox environment, in which players can explore, fight monsters and build.

The player can craft items such as pickaxes, swords and tools to smash blocks, fight monsters, and construct elaborate buildings, armour and weapons. It shares many similarities with the game Minecraft, both graphically and with the crafting and construction element. The art style of the game was inspired by JRPG games such as the Legend of Zelda series.

The game can be played both alone and with friends, supporting online play with up to 4 players simultaneously in the same world.