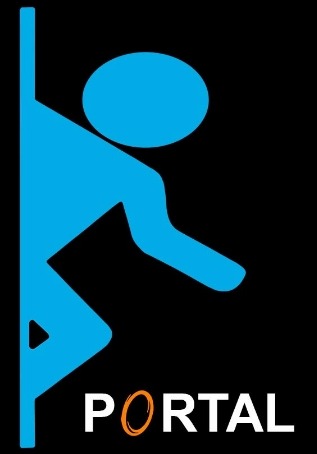 Portal is a puzzle-platform video game developed and published by Valve Corporation. It was released in a bundle package called The Orange Box for Microsoft Windows, Xbox 360 and PlayStation 3 in 2007. The game has since been ported to other systems, including OS X, Linux, and Android.

Portal consists primarily of a series of puzzles that must be solved by teleporting the player's character and simple objects using "the Aperture Science Handheld Portal Device", a device that can create inter-spatial portals between two flat planes. The player-character, Chell, is challenged and taunted by an artificial intelligence named GLaDOS (Genetic Lifeform and Disk Operating System) to complete each puzzle in the Aperture Science Enrichment Center using the portal gun with the promise of receiving cake when all the puzzles are completed. The game's unique physics allows kinetic energy to be retained through portals, requiring creative use of portals to maneuver through the test chambers. This gameplay element is based on a similar concept from the game Narbacular Drop; many of the team members from the DigiPen Institute of Technology who worked on Narbacular Drop were hired by Valve for the creation of Portal, making it a spiritual successor to the game.

Portal was acclaimed as one of the most original games of 2007, despite criticisms of its short duration and limited story. The game received praise for its originality, unique gameplay and dark story with a humorous series of dialogue. GLaDOS, voiced by Ellen McLain in the English-language version, received acclaim for her unique characterization, and the end credits song "Still Alive", written by Jonathan Coulton for the game, was praised for its original composition and humorous twist. Portal is often cited as one of the greatest video games of all time. Excluding Steam download sales, over four million copies of the game have been sold since its release, spawning official merchandise from Valve including plush Companion Cubes, as well as fan recreations of the cake and portal gun. A standalone version, titled Portal: Still Alive, was released on the Xbox Live Arcade service in October 2008, which added 14 puzzles to the gameplay, and a sequel, Portal 2, which was released in 2011, adding several new gameplay mechanics and a cooperative multiplayer mode.

In Portal, the player controls the protagonist, Chell, from a first-person perspective as she is challenged to navigate through a series of rooms using the Aperture Science Handheld Portal Device, or portal gun, under the watchful supervision of the artificial intelligence GLaDOS. The portal gun can create two distinct portal ends, orange and blue. The portals create a visual and physical connection between two different locations in three-dimensional space. Neither end is specifically an entrance or exit; all objects that travel through one portal will exit through the other. An important aspect of the game's physics is momentum redirection. As moving objects pass through portals, they come through the exit portal at the same direction that the exit portal is facing and with the same speed with which they passed through the entrance portal. For example, a common maneuver is to jump down to a portal on the floor and emerge through a wall, flying over a gap or another obstacle. This allows the player to launch objects or Chell over great distances, both vertically and horizontally, referred to as 'flinging' by Valve. As GLaDOS puts it, "In layman's terms: speedy thing goes in, speedy thing comes out." If portal ends are not on parallel planes, the character passing through is reoriented to be upright with respect to gravity after leaving a portal end.

Chell and all other objects in the game that can fit into the portal ends will pass through the portal. However, a portal shot cannot pass through an open portal; it will simply deactivate or create a new portal in an offset position. Creating a portal end instantly deactivates an existing portal end of the same color. Moving objects, glass, special wall surfaces, liquids, or areas that are too small will not be able to anchor portals. Chell is sometimes provided with cubes that she can pick up and use to climb on or to hold down large buttons that open doors or activate mechanisms. Particle fields known as emancipation grills, occasionally called "fizzlers" in the developer commentary, exist at the end of all and within some test chambers; when passed through, they will deactivate any active portals and disintegrate any object carried through. The fields also block attempts to fire portals through them.

Although Chell is equipped with mechanized heel springs to prevent damage from falling, she can be killed by various other hazards in the test chambers, such as turret guns, bouncing balls of energy, and toxic liquid. She can also be killed by objects falling through portals, and by a series of crushers that appear in certain levels. Unlike most action games at the time, there is no health indicator; Chell dies if she is dealt a certain amount of damage in a short period, but returns to full health fairly quickly. Some obstacles, such as the energy balls and crushing pistons, deal fatal damage with a single blow.

GameSpot noted, in its initial review of Portal, that many solutions exist for completing each puzzle, and that the gameplay "gets even crazier, and the diagrams shown in the trailer showed some incredibly crazy things that you can attempt". Two additional modes are unlocked upon the completion of the game that challenge the player to work out alternative methods of solving each test chamber. Challenge maps are unlocked near the halfway point and Advanced Chambers are unlocked when the game is completed. In Challenge mode, levels are revisited with the added goal of completing the test chamber either with as little time, with the least number of portals, or with the fewest footsteps possible. In Advanced mode, certain levels are made more complex with the addition of more obstacles and hazards.