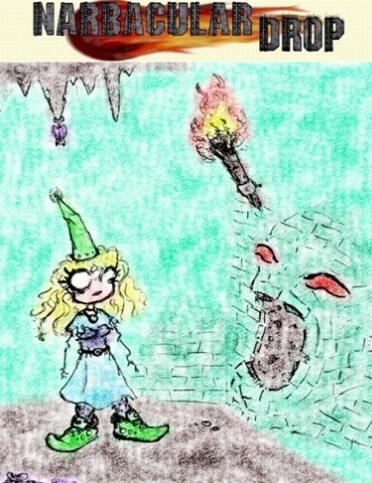 Narbacular Drop is an environmental puzzle video game developed by Nuclear Monkey Software. It was released for free online in 2005 for Microsoft Windows. It was the senior game project of students attending DigiPen Institute of Technology. The gameplay consists of navigating a dungeon using an innovative portal system. The player controls two interconnected portals that can be placed on any non-metallic surface (wall, ceiling, or floor). Gabe Newell, managing director of Valve, took interest in the team's work and employed the whole staff at Valve. The developers went on to write the critically acclaimed Portal using many of the same concepts.

The word Narbacular, which does not exist in any dictionary, was chosen primarily to aid in internet search engine results.

The plot involves the plight of a Princess "No-Knees", so named because she is unable to jump. Captured by a demon, the imprisoned princess discovers that the dungeon she is held in is actually a sentient elemental creature named Wally. Using Wally's portal-making ability, the princess sets out to escape and defeat the demon.

While Narbacular Drop features a 3D world reminiscent of such first-person shooters as Quake, the unique portal element and the character's lack of a jump ability makes navigation and puzzle-solving very unconventional. The player can open a single pair of interconnected portals at a time, each styled as a huge face with flaming eyes (orange or blue to tell them apart as the player repositions one or the other) and an open mouth big enough to see and walk through. Positioned with a point-and-click interface controlled by the mouse, portals are allowed only on natural surfaces and are prohibited from any metal, lava or other artificial surfaces in the game. Aside from the portals, important game elements include switches, boxes and huge rolling boulders which can crush the character. The player cannot save game progress. Because of the lack of a save feature, the game is actually quite short, as commented on by the modern Portal community.

Being mostly a proof of applied concept, the game contains only six puzzles to solve. However, members of the Narbacular Drop forum community have created a catalog of custom maps.