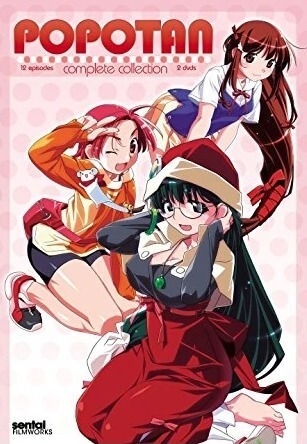 Popotan (ぽぽたん) is a Japanese adult visual novel developed by Petit Ferret with character designs by Akio Watanabe under the alias Poyoyon Rock. It was originally released as a PC game for CD-ROM on December 13, 2002 and subsequently re-released on DVD-ROM and for the PlayStation 2 with certain scenes removed. The title Popotan is a nonsensical word meant to reflect the prominence of dandelions, spelled tanpopo (たんぽぽ) in Japanese;n  Petite Ferret also produced a fan disc shortly before the DVD-ROM re-release. Popotan has been adapted to other media, including a novel series (Popotan～ Himitsu no Jumon～ Kōhen) by Sassami Yachiruda; a manga series by Yūjiro Izumi; a twelve episode anime television series directed by Shinichiro Kimura, animated by Shaft, and licensed in North America by Geneon USA and later, Sentai Filmworks; a radio drama (Poporaji); and several art and reference books.

Gameplay in Popotan follows a semi-predetermined plot; major events remain the same, but personal storylines can diverge from the player's choices. The game focuses on protagonist Chris, a drifter who meets three girls and their maid in a mansion near the ruins of Tokyo in the distant future. The player's goal is to make available sexual scenes and images that the player can view or replay at any time depicting the protagonist having sexual intercourse with one of the girls. The player can pursue other girls once they have finished one of the sisters' storylines.

Sales of the visual novel and its fan disc made the top 50 list of bestselling bishōjo games in Japan multiple times and it spawned an internet meme when the opening was put to sped-up music by the Swedish band Caramell. Reception of the anime has been mixed with those who reviewed the first volume critical of the anime's sexual themes, especially with regard to Mii, while those who reviewed the series as a whole have tended to give overall more positive reviews, praising the story's unexpected depth.

Popotan is a visual novel in which players spend most of their time in reading dynamic text, representing either dialogue between the various characters or the inner thoughts of the protagonist. After progressing through text, players either come to a "decision point" where they must choose from multiple options, or the text will end and the player must move to a new location, or, in the DVD-ROM and PS2 versions, use a shortcut option to continue to the next event. Time elapsed between decision points varies. The game pauses at these points and, depending on which choice the player makes, the plot will progress and may branch off in a specific direction. The player must romantically pursue the three sisters, and can seek other characters if one of the sisters' scenarios has been completed.

A special music mini-game commences at certain points in Mii's scenario. The goal of the mini-game is to max out "Magical Girl Mii"'s magical power meter by hitting balls at the right moment. The outcome of the mini-game affects the storyline. Successfully completing her scenarios unlock an omake option on the main menu, allowing the player to play the mini-game with different music tracks. Finishing Ai's scenario unlocks a new story featuring Unagi. The player can save the game only while text is on the screen in the PC versions; this limitation was removed in the PS2 port. The PS2 port also altered the events and scenes based on the DVD version.