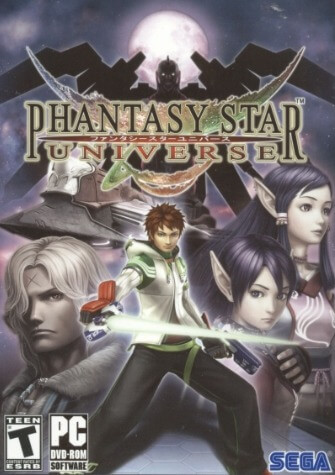 Phantasy Star Universe (ファンタシースターユニバース Fantashī Sutā Yunibāsu) (PSU) is an action role-playing video game developed by Sega's Sonic Team for the Microsoft Windows, PlayStation 2 and Xbox 360 platforms. It was released in Japan for the PC and PlayStation 2 on August 31, 2006; the Xbox 360 version was released there on December 12, 2006. Its North American release was in October 2006, in all formats. The European release date was November 24 the same year, while the Australian release date was November 30.

Phantasy Star Universe is similar to the Phantasy Star Online (PSO) games, but takes place in a different time period and location, and has many new features. Like most of the PSO titles, PSU is playable in both a persistent online network mode and a fully featured, single-player story mode.

Ethan Waber, the main character, and his younger sister, Lumia Waber, are at the celebration of the 100th anniversary of the Alliance Space Fleet on the GUARDIANS Space station. The celebration is interrupted when a mysterious meteor shower almost destroys the entire fleet. During an evacuation, Ethan and Lumia divert from the main evacuation route; collapsing rubble separates Lumia from Ethan. Ethan then meets up with a GUARDIAN named Leo, but they are attacked by a strange creature that paralyzes Leo. Ethan kills the creature. After killing multiple creatures and saving people, Ethan finds Lumia and they leave the station. Ethan reveals that he dislikes the GUARDIANS organization because his father died on a mission. Leo, impressed with Ethan's abilities, persuades Ethan to join the GUARDIANS.

Ethan and his classmate Hyuga Ryght are trained by a GUARDIAN named Karen Erra, who leads them against the SEED, the monsters that came from the meteors. After being hired to accompany a scientist to a RELICS site of an ancient, long-dead civilization, they find out that the SEED are attracted to a power source A-Photons, which the ancients used and that the solar system has just rediscovered. Karen discovers she is the sister of the Divine Maiden, the prophet of the Holy Light, and takes over that role when her sister dies at the hands of her estranged father who intended to kill Karen to increase the power of the original Divine Maiden (Mirei). After befriending Rogues, Guardians, and CASTs alike, Ethan angers Magashi, a CAST who heads the Endrum Collective and has been kidnapping scientists who know about the ancient power source.

Ethan and a Rogue named Alfort Tylor kill Magashi. Ethan helps activate an ancient weapon the prior civilization used to survive the SEED before they were almost completely wiped out. Ethan gathers allies against GUARDIAN orders to attack the last SEED outpost, where two of his friends and the scientists are being held. In the outpost, Magashi claims to have been resurrected by the SEED, but he is actually a CAST incarnation of Dark Force, who controls the SEED and whatever they infect. With the help of Karen, Leo, and Tonnio, Ethan defeats Magashi.

Ambition of the Illuminus is a direct continuation of Phantasy Star Universe. Shortly after the defeat of Magashi and the Endrum Collective, a mysterious group known as the Illuminus have appeared and threaten to exterminate all non-human races. The GUARDIANS are under attack, and Ethan Waber is now wanted for an attempted assassination. GUARDIAN instructor Laia Martinez is determined to find Ethan at any cost. As a new GUARDIAN receiving guidance from Laia, the player must search for Ethan and uncover the truth.

The universe is the Gurhal Star System, which consists of three planets; Parum, Neudaiz, and Moatoob - as well as a large space station, which, in addition to housing a large civilian population, also serves as the headquarters of the Guardians. Each planet has its own unique culture formed by its inhabitant races. The history of the Gurhal Star System is filled with conflict among the different races. However, after the Final Conflict 100 years ago, a union was formed between the three planets. This led to the birth of the Allied Army and ultimately to peace for the Gurhal Star System.

The game was first unveiled at E3 2004, with a subsequent showing at the next E3, and then again at TGS 2005. A closed beta stress test for the servers took place between April and May 2006.

The game received "mixed or average reviews" on all platforms according to the review aggregation website Metacritic. Erik Brudvig of IGN said of the PlayStation 2 version, "The result is an unsatisfying and stale experience that feels like an update to an old game that has had its day rather than a new title." In Japan, Famitsu gave the PS2 version a score of two nines, one eight, and one nine for a total of 35 out of 40.