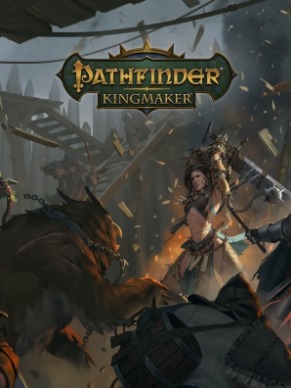 Pathfinder: Kingmaker is an isometric role-playing game developed by Russian studio Owlcat Games and published by Deep Silver, based on Paizo Publishing's Pathfinder franchise. Announced through a Kickstarter campaign in 2017, the game was released for Microsoft Windows, macOS, and Linux on 25 September 2018.

The gameplay is modelled on the Pathfinder role-playing game and inspired by classic computer RPGs such as Baldur's Gate and Neverwinter Nights. It features a real-time-with-pause combat system and an isometric perspective. One of the game's distinguishing features is its emphasis on realm-building, with the player's decisions as a local lord affecting the rest of the gameplay.

Character customization is a key feature, along with an alignment system where a character's alignment can change due to player choice. While the player begins with only one character of their creation, the game is party-based as companions join them along the way. These include both established Pathfinder characters and newly-invented characters. The game is estimated to last over 80, to 140 hours.

Pathfinder: Kingmaker is based on the six modules that make up the Pathfinder Adventure Path campaign published in 2010. It is set within the Stolen Lands, part of the greater region of the River Kingdoms south of Brevoy, which is in turn part of Golarion, the default setting of Pathfinder. It features the player carving their own realm out among the wilderness as a local lord, and expands upon the corresponding Kingmaker tabletop module.

The story begins with the main character and other adventurers being offered by local lords the chance to become the rulers of their own barony, provided they are able to defeat the bandits that are now controlling that area of the country. This not only sets the stage for the realm management portion of the game, but also embroils the character in a world of political intrigue and adventure.

Following the game's announcement, Owlcat announced they were considering different funding avenues. This culminated in the June 2017 launch of the Kickstarter campaign, which was billed as for expanding the game rather than funding it. The campaign ended by the end of the month after raising US$909,057 from more than 18,000 contributors.

Chris Avellone, an acclaimed scriptwriter for other role-playing games, contributed to the game. The game was published by Deep Silver and was released on 25 September 2018.

Pathfinder: Kingmaker received generally positive reviews, holding an aggregate score of 73 out of 100 on Metacritic. The Game Debate review praised the game's engrossing story, depth and realm management feature, calling it "a beautiful looking, rich CRPG, that delivers a great place to adventure, an interesting land to rule and the tools to carve out a realm that you can call home". In a somewhat less enthusiastic review, GameSpot's Daniel Starkey believes the game to be "hampered by a litany of small issues, balancing, and the gargantuan knowledge base you'll need to play most effectively", while also lauding the narrative and the kingdom management aspect of the game, mentioning that "for those with the patience, the rewards are well worth the investment". The game has also been criticized for its inconsistent difficulty curve and the opaqueness of some of its mechanics.

On the technical side, the game's launch was plagued by numerous bugs, long loading screens and balance issues, which hurt the game's initial reception with both professional critics and customers. In the following months, many of these issues have been fixed by patches.