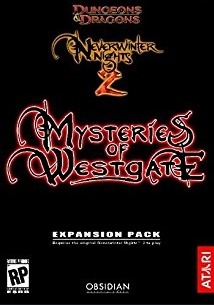 The game takes place in the Forgotten Realms world, a Dungeons & Dragons campaign setting, in the area of Westgate. The player creates a character at the start of the game who finds a cursed mask belonging to the "Night Masks", a thieves' guild at war with two other organizations. The player chooses which of these other organizations to side with, and embarks on a quest to lift the mask's curse.

Mysteries of Westgate was made after Ossian Studios' successful work on the 2006 expansion pack Darkness over Daggerford. The game's release was delayed to April 2009, despite its completion in September 2007, because of digital rights management issues and coordination difficulties among the three companies involved. Mysteries of Westgate met with mixed reviews; the game's plot and small amount of spoken dialogue were criticized by reviewers, while its music and low price for overall content were praised.

Mysteries of Westgate is a role-playing video game that is based on the fantasy role-playing game Dungeons & Dragons, and uses the d20 System rules, which are based on determining the results of most tasks, such as attacks, by performing the equivalent of rolling a 20-sided die. The player begins the game by either importing their character from Neverwinter Nights 2 or creating a new one that starts at character level 8. Each character has a race (such as human or elf) and a class (such as fighter or wizard), which determine the character's main abilities. Mysteries of Westgate has gameplay similar to the original Neverwinter Nights 2 and uses the same systems for gameplay elements, such as character levels, combat, and magic. The gameplay takes place primarily from an overhead perspective in a three-dimensional environment. The player moves and commands characters with the mouse.

The game's designers estimate that Mysteries of Westgate contains over 15 hours of gameplay, part of which is provided by pursuing optional side quests unrelated to the main plot. Mysteries of Westgate's campaign features content that does not appear in Neverwinter Nights 2 or its other expansions, including four new monsters (such as the wererat and sea serpent-like quelzarn), a set of "sewer" terrain tiles, and new music, all of which is available to players for use in the creation of custom levels. The pack includes over one hundred magic items, equipment which the character can use during the adventure.

The storyline of Mysteries of Westgate is unrelated to Neverwinter Nights 2 or its other expansions. It begins with the player character (PC) finding a cursed mask in a dungeon, which causes the PC to have nightmares, and which cannot be discarded. The player soon discovers that the mask belongs to a group of thieves known as the Night Masks of Westgate. After traveling to Westgate, a port city along the Dragon Coast, the PC discovers that the Night Masks are involved in a guild war with a rival group of thieves known as the Ebon Claws. The temple of Lathander is also fighting the Night Masks, and the PC is faced with the choice of joining the temple or the Ebon Claws. The PC is joined by three companions near the start of the game: the rogue Rinara, a former Night Mask; Mantides, a fallen paladin; and Charissa, a cleric of Tyr. All three travel with the PC for most of the adventure.

The party then undertakes a number of quests, which vary depending on which faction the PC sides with. As the quests are completed, more is revealed about the cursed mask and how to get rid of it. The party eventually learns that the Night Masks are led by vampires, and additional clues lead them to the vampires' catacombs. After defeating the vampire Latasha, the PC travels through a portal to reach the chamber of the Night Masks' leader, Orbakh. Orbakh gives the PC the choice to either become a vampire or keep the cursed mask.

The game's ending depends on the PC's choice. If the PC chooses to become a vampire, former allies turn against the PC. Once they are defeated, Orbakh sends the PC to destroy the Ebon Claws. If the PC instead decides to keep the mask, Orbakh attacks; after his defeat, the leader of the Ebon Claws arrives with a group of followers and attacks the party. After the party is victorious, they kill the last of the Night Masks and free the player character from the cursed mask.

Reviews of Mysteries of Westgate were mixed. 1UP.com's Jason Wilson said that the game's plot is "an intriguing tale, and even after finishing the game, a number of encounters and plot points ring in my head ... but the story's poor stitching distracts from its arc—I felt like a great hand ... was pushing me through the plot, and the tale felt a bit muddled toward the end." Brett Todd of GameSpot called the plot "rough around the edges", while GameZone reviewer Michael Lafferty said, "The game may have a disjointed storyline, but there are moments where humor shines through, and the game does take a few interesting plot twists. And the exploration of the city zones, the underground areas where the trolls abound, hold that sense of joyful discovery that make an RPG worth playing." Numerous reviewers mentioned that the impact of the mask which drives the story is minimal, having little effect on the actual gameplay. Lafferty said the side quests were not necessarily optional, as they were often a source of additional gold, and a certain point in the game's plot required a substantial sum of it to proceed. GamesRadar's Rich McCormick praised the game's storyline and main quest as some of its best points. In a review for GameStar, Christian Schmidt thought that the game's appearance and humor were poor, but recommended it because of its strong storyline.