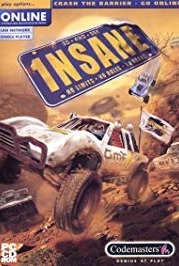 Insane (stylized as 1NSANE) is an off-road racing game by Invictus and distributed by Codemasters. While in development, it had been provisionally titled Off The Road.

Levels are set in real world locations, scattered throughout North America, Europe, Africa, Asia and Australia. The actual design, however, is fictitious. The single player campaign comprises a series of championships in different vehicle classes, where the player unlocks new vehicles and locations, based on their score. Vehicles range from utility vehicles to light buggies and are either fictional or inspired by actual production vehicles. Though the names do not correspond with any actual vehicle, the fact is evident both visually in-game and in the names of the game's files.

Players can drive cars of their choices in either of nine events, which include the Capture the Flag, Jamboree, Gate Hunt, Destruction Zone, Pathfinder, Off-Road Racing, Return the Flag, and Free Roam, which, exclusively, is only available in practice mode.

Insane received generally mixed to positive reviews on GameRankings and Metacritic. The game was praised for its graphics and realistic gameplay.