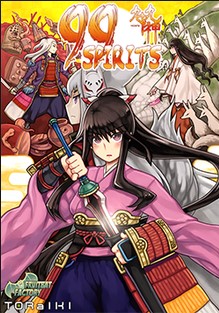 99 Spirits (Japanese: 九十九神 Hepburn: Tsukumogami) is a puzzle role-playing video game developed and published in Japan by TORaIKI in July 2012 for Microsoft Windows. It was localized and published in English by Fruitbat Factory on May 31, 2013 after a successful crowdfunding campaign. Two pieces of downloadable content, featuring side-stories presented in a visual novel format, were released in 2014 and 2015.

The story takes place in medieval Japan, and focuses on Hanabusa, a girl who seeks to avenge her mother's death by fighting evil spirits. By using the gems embedded in her sword, she is able to find clues to the spirits' names; players need to correctly identify the spirits to be able to harm them. By acquiring more gems, players are given access to more abilities; one such gem allows players to capture spirits and use their abilities in battle and when solving puzzles.

Reception of the game has been varied, ranging from negative to highly positive, with reviewers generally appreciating the art, sound, presentation, and inventive gameplay, while criticizing the plot, level designs, and repetition.

99 Spirits is a turn-based puzzle role-playing video game in which players fight evil spirits known as Tsukumogami. In order to hurt an enemy spirit, players must first find out the enemy's identity. To do this, players need to charge the gems embedded in the player character's sword, which is done by attacking and defending; once the first gem in the sword is filled up, players get access to clues to the enemy's identity, in the form of words or letters from or relating to its name. For instance, the clues to a katana spirit's identity may be "KA", "blade", and "NA". Once the second gem is filled up, players are able to type what they think the enemy's name is; if they correctly identify the spirit, they are able to fight it, whereas if they guess incorrectly, the player character takes some damage and the gems need to be charged again.

Throughout the course of the game, players gain access to new gems, which grant players more abilities. Among the gems is one that gives players the ability to capture spirits instead of fighting them; once players have captured a spirit, they are able to use its abilities in combat. In addition to acquiring new gems, players are able to make previously acquired gems more powerful; for instance, a powered-up version of the first gem can give players access to more clues to enemies' identities.

Players control a girl named Hanabusa (英), who lives in Heian-kyō in medieval Japan. Her mother gets killed by evil spirits, so she seeks to get revenge; on her way, she receives a sword that has been passed down from her mother, which allows her to see the spirits' true forms. After a spirit that claims to be her father destroys the sword, she has to mend it and find out the truth about her father.

The game was developed by the Japanese independent developer TORaIKI, and was originally released digitally in Japanese in July 2012, with a physical release in August 2012 at Comiket 82. It was later released in English by Fruitbat Factory on May 31, 2013 after an Indiegogo campaign.

After the release of the original game, two pieces of downloadable content were made available, featuring side-stories presented in a visual novel format. The first, Cage of the Night, was made available on July 4, 2014, and the second, Weeping Demon's Bell, on February 23, 2015.