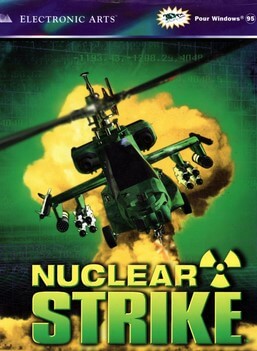 Nuclear Strike is a helicopter-based game, with strategy elements added to the action gameplay. The plot concerns an elite special force - the player's allies - pursuing a nuclear-armed rogue spy through a fictionalised Asian setting. It retained the earlier game's engine but added several modifications to improve graphical performance and make the game more accessible. The game features 15 playable vehicles, a large increase from previous games. In addition to the main fictionalised Apache, there are secondary helicopters, jets, armour and a hovercraft. The player also commands ground troops in occasional real-time strategy sections.

The game received positive, negative and mixed reviews. Critics noted a weak storyline, though GameSpot dismissed this is as unimportant in an action game. GameSpot called the graphics - which made use of specialised hardware such as 3Dfx Voodoo video cards and the N64 Expansion Pak - "about as good as it gets", while Allgame said they are "decent" and Daily Radar called them "horrible". Critics praised the full motion video as well as the music and sound effects. Reviewers enjoyed the straightforward gameplay but several complained of a close similarity to its predecessor Soviet Strike and questioned the game's value as a result.

The game begins in Indocine, a fictional Southeast Asian country. The player controls a Super Apache helicopter as part of the STRIKE covert operations force, led by General Earle (John Marzilli) and assisted by technician Hack (Antwon Tanner) and propagandist Andrea Gray (Susan Turner-Cray). The antagonist is Colonel Beauford LeMonde (Bo Hopkins), a spy-turned-warlord who has stolen a nuclear weapon. Allied to STRIKE in Indocine is guerrilla leader Naja Hana (Moon Bloodgood), whose forces join the player in attacking LeMonde's forces. Meanwhile, LeMonde bluffs STRIKE by arming a fake nuclear bomb in an old temple compound, which results in Naja attempting to locate the warhead and LeMonde. At the same time, the player is sent on a wild goose chase attacking a decoy convoy thought to have the nuclear bomb being transported away from Indocine. In actuality, LeMonde escapes capture long before STRIKE could catch up to him and he managed to smuggle the real nuclear bomb away from Indocine off-screen.

This prompts the player to extract Naja from the now booby-trapped compound before the whole compound blew up sky high. Nonetheless, his forces are eventually defeated in Indocine and STRIKE conducts their operations in the South China Sea, where LeMonde is discovered dealing with Napoleon Hwong (Philip Tan), head of a fictional Triad-like criminal organization known as the Octad. The player recruits mercenary Harding Cash (Jamie Donovan) in battling the pirate warlord in an attempt to recover the missing nuclear weapon. After defeating Hwong's forces, the player and Harding manage to capture and interrogate Hwong for information concerning the whereabouts of the nuke long enough before Hwong commits suicide. The player eventually heads to Pyongyang, North Korea, where the stolen nuke is located.

LeMonde resurfaces in Pyongyang, where North Korean ruler Kym Zung-Lee invites several world leaders to a peace conference. The two plan to kidnap the world leaders, especially since Kim financed LeMonde's operations in Indocine and getting the nuclear weapon (stashed inside Kim Il-sung's statue on Mansudae Hill). Using a small helicopter and nonlethal weapons, the player is able to spirit the delegates to a French frigate somewhere in the Taedong River and get them out of the country; other delegates left behind are sent to bomb shelters or are evacuated by STRIKE Chinook transports. Also, between escorting the delegates to safety, the player and Andrea manage to take over an AH-1 Cobra attack helicopter from a museum while fending off Kym's security forces in the process. The missing nuclear weapon explodes as the player sits out the blast in the Rungnado May Day Stadium.

North Korea blames the nuclear explosion on the South and sends its forces across the DMZ in an attempt to start a second Korean War while LeMonde heads to Russia. STRIKE heads down to the DMZ and assists US Forces Korea and the South Korean Army in repelling the assault. Having prevented another Korean War, STRIKE, together with Naja and Cash, attack an old Mongol-era fortress in Siberia, where LeMonde has brought in mercenaries to fortify it as he prepares the launch of a "proto-nuclear" missile designed to rupture the ozone layer. LeMonde's forces are eventually routed, the proto-nuclear missile eventually destroyed, LeMonde himself is killed, and Naja and Cash fall in love.

Nuclear Strike is a helicopter-based shooter game with a blend of both strategy and action, which the player views from outside the helicopter from an overhead perspective. It is similar to previous games in the series, but has 15 playable vehicles, a larger number than any of its predecessors. The main helicopter is a fictional Super Apache, with additional helicopters including the Cobra and other Hueys. Playable jets include the Harrier Jump Jet and a fictional V/STOL version of the A-10 Thunderbolt II. The player can use surface vehicles including the M1 Abrams tank, Bradley armoured vehicle, the Multiple Launch Rocket System and a PACV hovercraft.