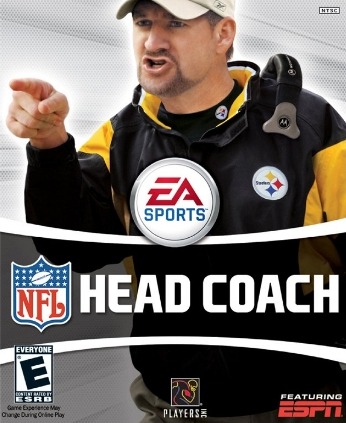 NFL Head Coach is a National Football League video game that was released on June 20, 2006 for the PlayStation 2, Xbox and PC. The game allows the player to control an NFL team and become the greatest coach in NFL history. It features then-Pittsburgh Steelers head coach Bill Cowher on the cover.

The concept behind the game puts the player in the position of a head coach for a National Football League franchise, similar to FIFA Manager where the player takes control of the head coach of a football team. The player will make roster moves, create playbooks, and hire and fire assistant coaches. Success is measured by wins, playoff success, how well the player does in the NFL Draft, and the careers of assistant coaches. The game also has ESPN integration, such as Mel Kiper, Jr. hosting the NFL Draft, Trey Wingo for the game's first few cutscenes and one cutscene featuring Steve Sabol.

The game begins the week after Super Bowl XL when the Pittsburgh Steelers pull off a 21–10 victory over the Seattle Seahawks. The coach that the player is about to take control of was formerly the offensive/defensive coordinator for the Steelers and is now ready to move up to take the reins of an entire team. First, the player selects a team and then proceeds to the job interview. The coach overall will range from 50 to around 80 at the end of the interview. Depending on how well the interview goes, the player will receive up to five offers from five teams though there are eight teams that are likely to send the player an offer. The player selects a team and then signs a contract with them. In addition to being the head coach, the player is also the general manager of the team. On the first day, the player will meet the team owner. Aside from meeting the team owner, the player also meets the other coaches with whom he will work. Daily activities, depending on the time of the season, include hiring and firing coaches, calling players' agents, checking e-mail, identifying players to scout at the NFL Scouting Combine, gameplanning for the next game, and running practice. During the game, the player can motivate and discuss strategy with the team, which can affect the motivated player's reception. The career is 30 years long from 2006 to 2036.

The game consists of the usual 32 teams with their usual stadiums. Unlike NFL Head Coach 09, however, Aloha Stadium is not in NFL Head Coach.

The game received positive reviews. IGN gave the game a 7.2/10, praising the NFL Films score, though commenting about the Madden engine being "not as pretty as other football games". On the contrary, GameSpot praised the engine, though criticizing the multiplayer; GameSpot also graded the game as 7.2/10. CNET scored the game 3.5/5 stars, also praising the NFL Films score, though commenting that the on-field action is blander than usual due to the lack of in-game announcers, along with some occasions when players are negatively motivated after positive motivation.