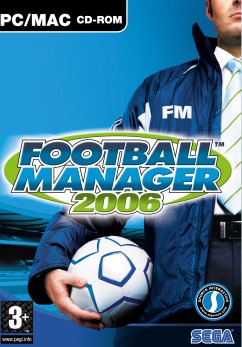 Football Manager 2006 is a 2005 football management simulation game. FM06 is the second game in the Football Manager series. It is available for PC, Mac, and PSP platforms, and was released in the United Kingdom on 21 October 2005. On the same day as the game's release, Sports Interactive also released a patch to fix some bugs discovered during the Beta and Gold stages of development. In its first week of release, it became the second-fastest-selling PC game of all-time in the UK. In the United States and Canada, the game is sold as Worldwide Soccer Manager 2006. In April 2006, an Xbox 360 version of the game was released.

It was succeeded by Football Manager 2007.

FM06 features similar gameplay to that of the Football Manager series. Gameplay consists of taking charge of a professionala association football team, as the team manager. Players can sign football players to contracts, manage finances for the club, and give team talks to players. FM06 is a simulation of real world management, with the player being judged on various factors by the club's AI owners and board.

FM06 adjusts some gameplay that was found in the original football manager release. These adjustments include team-talks, simplified training and in-game help screens. As has been customary with the series a beta demo of the game was released on 12 September 2005. This was later followed on 30 September by a gold demo. This is a cut-down, limited time version of the full game which is sent to the game manufacturers.

Football Manager 2006 contains the same playable leagues as Football Manager 2005 but with 2 small additions. The French league now has a fourth viewable but unplayable level (the CFA division), and the structural change to the Swedish league involving the re-instatement of Division One has been implemented, with Division Two retained as a playable fourth level.citation needed

Fictional team Harchester United from the Sky One drama series, Dream Team were included in FM06 as an Easter Egg. This option comes in the form of a text file, placed in the game's directory.