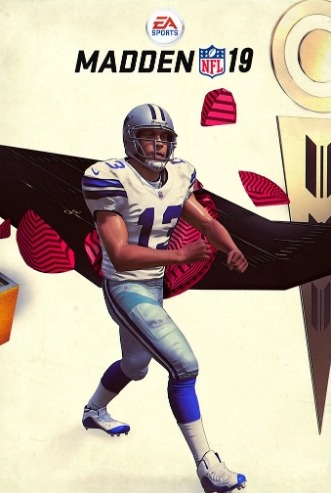 Madden NFL 19 is an American football sports video game based on the National Football League (NFL), developed and published by EA Sports. Pittsburgh Steelers wide receiver Antonio Brown is the cover athlete of the standard edition of the game, while Pro Football Hall of Fame wide receiver Terrell Owens is on the cover of the "Hall of Fame" version, featured in a Dallas Cowboys uniform. An installment in the long-running Madden NFL series, the game was released for PlayStation 4, Xbox One, and Microsoft Windows on August 10, 2018, the first time it released for the latter since Madden NFL 08.

In May 2018, Pro Football Hall of Fame inductee Terrell Owens was announced to be on the cover of the "Hall of Fame" edition of the game. Owens is featured in a Dallas Cowboys uniform, a move which was questioned by some as Owens played eight seasons with the San Francisco 49ers, compared to just three with the Cowboys. The game's standard edition cover features Pittsburgh Steelers wide receiver Antonio Brown.

The soundtrack for the game feature over 30 tracks, including artists such as Migos, Pusha T, Post Malone, T.I., Fat Joe, Cardi B, and Nicki Minaj, among an original score by John Debney. EA also announced they would add several more tracks to the game over the course of the 2018 NFL season.

Madden NFL 19 features "real player motions," allowing players to push blockers to gain more yards while running and make realistic cuts up-field after the catch, as well as take part in interactive touchdown celebrations for the first time since Madden NFL 09 including team celebrations, which were made legal by the NFL for the 2017 season. There were also changes to the Ultimate Team mode, introducing three vs three online matchups as well as a "Solo Battles" game mode, a leaderboard-driven reward system that measures players' performances in daily single-player challenges. The game will also feature a sequel to Longshot, Madden NFL 18's single-player story-driven mode, with more focus on football gameplay and NFL-related events.

In continuation of the Longshot story mode in Madden 18, protagonist Devin Wade is revealed to be playing in training camp for his hometown team, the Dallas Cowboys. On the other hand, Devin's best friend Colt Cruise is a struggling country singer living in his hometown, Mathis, Texas. Colt runs into his long lost father as he revealed Colt has a half-sister, Loretta forcing Colt to take care of her.

Colt still dreams of becoming an NFL wide receiver and tries out for the Miami Dolphins before getting cut after the first preseason game. Colt and Devin's high school football coach Hank Jamison died from illness as Colt decided to step up as the Mathis Bullfrogs head coach. With Mathis High School fearing a merger with a rival school due to insufficient funds, Devin revealed to be a member of the Houston Texans donates money along with DeShaun Watson and a newly acquired receiver Antonio Brown.

Devin, in his first game as a starting quarterback, defeats the New England Patriots while Mathis came up with enough donations with the help of the Texans and Colt to save the high school as Colt remains the coach of Mathis High School.

The game was released for PlayStation 4, Xbox One and Microsoft Windows on August 10, 2018, with the Windows release being the first for the series since Madden NFL 08 in 2007. A "Hall of Fame Edition" was released on August 7 for subscribers of the EA Access program.

In a review for IGN, Dustin Toms wrote: "Madden 19 has finally cracked that slightly repetitive feel that can make it tough to go on, game after game. With Real Player Motion delivering a fluid on-the-field experience, and Franchise mode customization offering another level of realism, Madden is in a great place." Bradley Russell of GamesRadar+ praised the updated catching and running mechanics as well as the Longshot: Homecoming mode, calling the game a "stunning return to form" for the series, and one of the "finest" in years. GameSpot praised the animation and updates to the commentary, although noted the changes to Longshot were disappointing.