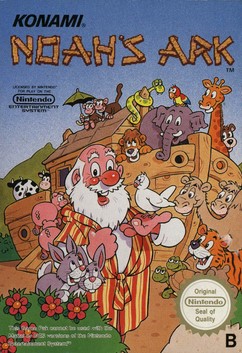 Noah's Ark is a platform game for the NES produced by British studio Source R&D and published in 1992 by Konami. It was released in Europe. Unlike most other games based on Biblical content released around the same time, this one was officially approved by Nintendo. It is very loosely based on the biblical story with the same name.

The player controls Noah to rescue different animals across the world. Noah is aided by powerups. Ducks give the player different weapons; some items turn Noah invulnerable, in different form or freeze enemies. During each stage, water slowly rises, typically making him harder to maneuver.

The game takes place on all seven continents (Europe, North America, South America, Africa, Antarctica, Australia and Asia) with three stages per continent, thus having 21 stages total. At the end of the two thirds of the stages Noah has to fight a drainplug monster. Every third stage ends with a large boss fight.