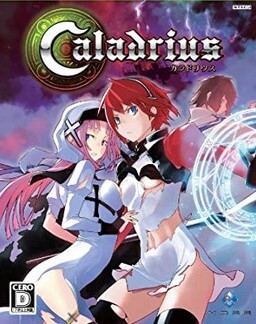 Caladrius (カラドリウス Karadoriusu) is a scrolling shooter developed and published by MOSS, first released in April 25, 2013 for the Xbox 360 in Japan. It was later released digitally in North America and Europe on September 4, 2015. After its console debut, Caladrius was ported to arcades under the name Caladrius AC, adding extra game modes and supporting Sega's ALL.Net system. The game was released for the PlayStation 3 under the name Caladrius Blaze on August 14, 2014 exclusively in Japan. This version added extra characters, stages, and game modes. The updated version was also released for the PlayStation 4 on August 9, 2016 and Microsoft Windows on January 12, 2017, all of which were published by H2 Interactive. On July, 19, 2019 the game was released on the Nintendo Switch.