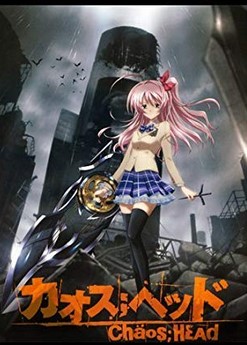 Chaos;Heada (stylized as "ChäoS;HEAd") is a visual novel video game developed by 5pb. and Nitroplus. It is the first entry in the Science Adventure series, and was originally released for Microsoft Windows in 2008; an enhanced version titled Chaos;Head Noah was released for Xbox 360 in 2009, and has since been ported to multiple platforms. The game follows Takumi Nishijo, who gets caught up in the "New Gen" serial murders. He frequently experiences delusions and hallucinations; the player can use the "delusional trigger" system to decide whether he should experience positive or negative delusions, which determines the story's ending.

The game was planned by Chiyomaru Shikura and written by Naotaka Hayashi, and features character designs by Mutsumi Sasaki and music by Takeshi Abo and Zizz Studio. Abo read through the game's story before composing the music, a process that took a longer time but made it possible to compose with a better relationship to the game's worldview. Gaming publications have complimented the game's story, and wished for an English release. The game was a success, helping 5pb. establish itself as a game developer. In addition to the game, three manga, an anime series and an internet radio based on Chaos;Head have been released, as well as the spin-off game Chaos;Head Love Chu Chu! and the thematic sequel Chaos;Child.

Chaos;Head is a visual novel in which the player takes the role of Takumi Nishijo, an otaku and borderline shut-in, who experiences delusions. The game is mostly linear, but frequently includes player choices: the player is able to choose whether Takumi should experience a positive delusion, a negative one, or if he should manage to stay grounded in reality. Positive delusions involve seeing comical or erotic scenes, while negative ones include graphic violence or other horror elements. The player chooses the delusions through the "delusional trigger" system: a green and a red light are displayed on the top of the screen, representing positive and negative delusions, respectively.

Once the player has played through the game once, the delusions they choose during further playthroughs determine which of the game's three endings they will reach. When the player replays the game, they are able to fast-forward past passages of text they have already read. In the updated version of the game, Chaos;Head Noah, further endings are possible to reach, also by choosing what delusions to experience. The player has access to the in-game "TIPS" glossary, where they can read about internet slang and other key vocabulary used in the game; as the player encounters such words in the dialogue, the words appear blue and are registered in the glossary.

The game is set in 2009 in the Shibuya district of Tokyo, where Takumi lives in a cargo crate on top of an apartment building. He discusses the recent series of "New Generation Madness" ("New Gen") murders in Shibuya with his online friend Grim, when a person with the username "Shogun" sends Takumi image files depicting a man pinned to a wall with stakes. Later, Takumi witnesses a pink-haired girl committing the murder portrayed in Shogun's image files; he leaves the murder scene in fear. A few days later, the girl, whose name is Rimi Sakihata, sits next to Takumi in school; he thinks she will kill him, but learns that they supposedly have been friends for a year.

Convinced that Shogun is targeting him, he tries to distance himself from having witnessed the murder scene and avoid getting involved in New Gen, which draws the attention of the police. Between him being suspected, more New Gen murders occurring, and Shogun supposedly targeting him, Takumi finds himself experiencing hallucinations and paranoia, and is unsure of what is real and who he can trust. In one of his delusions, Shogun appears as an old man in a wheelchair and tells him that more people will die unless he wakes up.

Takumi sees a girl carrying a large sword in public, and notices that only he can see it. Ayase Kishimoto, who recently transferred to Takumi's school, tells him that he needs a "Di-Sword" to be saved. She pulls her Di-Sword out of thin air and tells him that Di-Swords are delusions projected onto people's minds by people with special powers. He learns that the girl carrying the sword – Sena Aoi – and her friend Kozue Orihara also can project delusions, and that such people are called "gigalomaniacs". He is told that he, too, is a gigalomaniac, and that gigalomaniacs can project delusions into reality, which is called "real-booting".