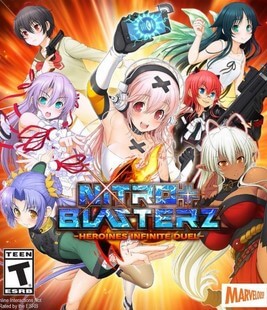 Nitroplus Blasterz: Heroines Infinite Duel (ニトロプラス ブラスターズ -ヒロインズ インフィニット デュエル- Nitoropurasu Burasutāzu: Heroinzu Infinitto Dueru) is a fighting game developed by Examu and published by Nitroplus. The game crosses over heroines from various visual novels and games released by Nitroplus, as well as those from manga and anime series that Nitroplus writers have been involved with. The game was released in arcades on April 30, 2015 and was released on PlayStation 3 and PlayStation 4 in collaboration with Marvelous Entertainment's Marvelous Inc. on December 10, 2015. Marvelous USA published the game in North America on February 2, 2016. The game originates from the doujin game Nitro+ Royale: Heroines Duel, which is stated as its predecessor.

The game uses five buttons; light attack, medium attack, heavy attack, escape action, and heavy action. The escape action button can be used to perform evasive maneuvers and guards while heavy actions can be used to push an opponent back. Players can perform Infinite Blasts, which can interrupt an opponent's attack, Variable Rushes, which allows for surprise combos, and Lethal Blazes, which serve as the game's super combo attacks. Players can also choose two support characters which they can summon to assist them.

There are 32 characters which are split up into playable characters and support characters. Super Sonico was initially a support character, but was later made playable. An original character, who is a dark palette swap and final boss version of Al Azif, Al Azif Ex Mortis is the non-playable final boss of the game, created by Mugen Yoguruma, act as a copy of the Necronomicon, crafted from the fragments of the Al Azifs from the infinite universes in which Demonbane failed. At the end of the story mode, Ex Mortis is defeated and absorbed by Al Azif, who gains all of Ex Mortis' memories, as well as the completion of her soul.