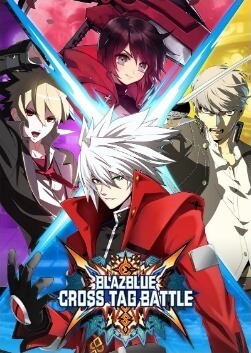 BlazBlue: Cross Tag Battlea is a 2D fighting game developed and published by Arc System Works, released on PlayStation 4, Nintendo Switch and Microsoft Windows. The game initially features characters from the BlazBlue, Persona 4 Arena, Under Night In-Birth and RWBY franchises by Arc System Works, Atlus, French Bread, and Rooster Teeth respectively. As of 2019, two additional franchises are included in the roster with the first one confirmed as Arcana Heart by Examu.

The game received mostly positive reviews, with praise directed towards its visuals, music, online functionality, and game mechanics. However, heavy criticism was directed towards its lack of overall content at launch, as well as its downloadable content (DLC) practices.

A singularity called the "Phantom Field" is mixing the reality of BlazBlue with the other chosen unseen universes. Members of those worlds are abruptly summoned while instructed by a "Phantom Field", the mysterious voice itself, that they must protect the "Keystone" in order to return to their homes. But as the Keystone is divided into more than one fragments among the groups, it results in a battle to acquire them.

Cross Tag Battle initially started out with 40 characters, 20 in the base game and another 20 available as Season 1 DLC. On June 7, 2018, Arc System Works president Minoru Kidooka confirmed that Season 2 DLC has been planned, starting from Arcade Edition in Late April, 2019 then released at Mid-May, 2019. Blake Belladonna and Yang Xiao Long were each scheduled to be downloadable content available for free, with the remaining 18 characters available for a premium. In the PC version's release, Blake was made available at launch as the 21st base character, while Yang was added via update patch at her release date, leaving only 18 characters of Season 1 DLC. The first set of Season 2 DLC was announced during Evo Japan 2019, with Arcana Heart being added as a fifth franchise that were foreshadowed in Evo 2018, as well as a sixth fate being announced. Naoto Kurogane, Teddie, Seth the Assassin, and Heart Aino start off the Season 2 DLC for free at the launch of the arcade version and as paid content during the release of the console version's 1.5 patch (or for free if consumers have the All-in-One pass).

In a 2016 interview with Forbes, Mori Toshimichi revealed his interest in making a RWBY fighting game, which attracted Rooster Teeth's attention.

Before BlazBlue: Cross Tag Battle's reveal, Rooster Teeth teased the possibility of a RWBY fighting game being revealed at Evo 2017 on their Twitter account.

On July 16, 2017, BlazBlue: Cross Tag Battle was announced at the Evo 2017 championships following Ryusei Ito's victory in BlazBlue: Central Fiction. Ragna the Bloodedge, Jin Kisaragi, Yu Narukami, Hyde Kido and Ruby Rose were revealed to be in the game via the announcement trailer. Later, it was announced that Konomi Higuchi would be the game's lead character designer. According to game director Toshimichi Mori, Cross Tag Battle would be released exclusively on consoles prior announcing it's Arcade version later on.

It was said that the sprites of Under Night In-Birth cast would be redrawn for this game to match out BlazBlue's visual style. Recently, Arc System Works revealed a teaser trailer for a pink 5th franchise to be included, which was later revealed to be Arcana Heart in the form of its titular character Heart Aino at EVO 2019, followed by an unidentified cyan colored 6th franchise. As the first three series are mostly reusing the pre-existing sprites and resizing them to mesh well with the 1080p resolution gameplay, such as the Under Night In-Birth cast using the sprites made by French Bread, Arcana Heart is the only older fighting game series to have their sprites visibly redrawn by their home company Examu willingly since Heart's inclusion in Examu's licensed fighting game crossover Nitroplus Blasterz.

According to the producer, the game's targeted userbase is non-Japanese. Accordingly, Cross Tag Battle is the first BlazBlue game since Chrono Phantasma to be dubbed into English, with an option to toggle between English and Japanese voices on a by-character basis.

The arcade port allows players to use USB controllers, in this case, the PlayStation 4 controller.

BlazBlue: Cross Tag Battle received mostly positive reviews, with praise directed towards its visuals, music, online functionality, and game mechanics. However, heavy criticism was directed towards its lack of overall content at launch, as well as its downloadable content (DLC) practices. Famitsu awarded it a score of 35/40.

Before release, Arc System Works announced that there would be twenty paid downloadable content (DLC) characters for the game for its first season, resulting in Cross Tag Battle launching with only half of its planned roster at 20. This caused backlash from fans, with the arguments that the game mostly reuses assets from earlier Arc System Works fighting games, and that half of Team RWBY would be sold separately. In response, Mori announced that Blake and Yang would be released free of charge. In addition, he stated that costs for the DLC characters would not exceed that of the game's base retail cost.